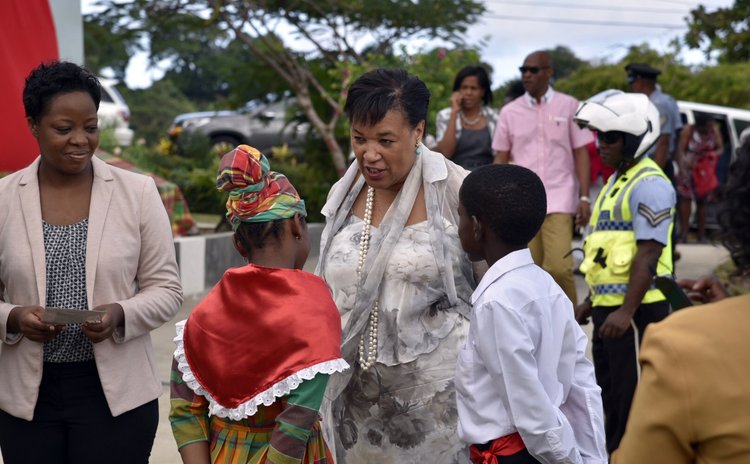 Baroness Patricia Scotland speaks with pupils of the Baroness Scotland primary School in Vielle Case during a renaming of the school function (Photo: Office of the Prime Minister)

Before that visit The Right Honourable Patricia Scotland QC, who later this week takes office as the sixth Secretary-General of the Commonwealth of Nations, will today give an opening address to the 15th Conference of Presidents and Governors-General of the Caribbean region in Antigua and Barbuda, the release said.

"The Caribbean is where the world meets and having an opportunity to speak to all of the Governors-General and the Presidents is going to be a real opportunity for all of us to talk about what will make a difference for the region," she states in a special video message released earlier this morning.

Patricia Scotland takes over as Commonwealth Secretary-General from Kamalesh Sharma, who steps down on 31 March after eight years of service.

Dominica, the country of her birth, nominated Scotland to the post; she was selected by the 53 member countries of the Commonwealth at their Heads of Government summit in Malta last November.

It was an election that spit countries of the region between one group that supported Scotland and another that stood with Antigua and Barbuda's nominee, Sir Ronald Sanders.

When she takes office on Friday 1 April, she will be the second Secretary-General from the Caribbean and the first woman to hold the post.

"I am determined that I will do everything in my power to make sure that our region is proud of what we are together able to achieve," Patricia Scotland QC says in her video message.

The 15th Conference of the Presidents and Governors-General of the Caribbean region is held in St. John's, Antigua and Barbuda, from 29-31 March 2016.

Patricia Scotland QC will address both the opening day of the conference as well as the final day, on Thursday 31 March, on the eve of taking office.