One prime minister practically called another a liar in a boiling controversy over nominations for the post of Commonwealth Secretary General. Dominica is in the middle of the pot 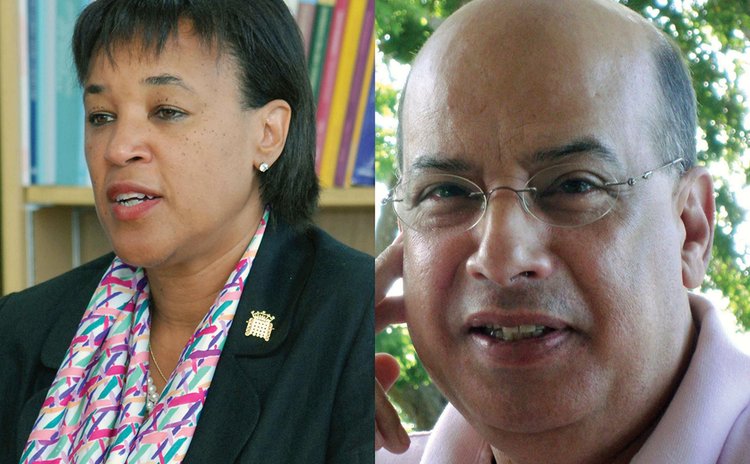 Dominica is caught in the middle of a swirling controversy between the leaders of Antigua & Barbuda and Barbados.

At the heart of the controversy is the selection of a Caribbean candidate for the post of Commonwealth Secretary General.

The 15-member Caribbean Community (CARICOM). normally agree and support a single candidate for top international positions. However, both Antigua and Dominica have put forward nominees and neither appears willing to back down. Trinidad & Tobago, which had also announced its intention to nominate its own candidate, has since withdrawn his name from consideration.

Prime Minister Roosevelt Skerrit has nominated the Dominica-born British jurist Baroness Patricia Scotland, much to the annoyance of many CARICOM leaders who point to the fact that she left Dominica at age two, dedicated her entire career to Britain and has never worked for Dominica or any Caribbean government or institution.

"Given the baroness's many ministerial positions in the United Kingdom, why is she not a UK government nominee?" one leader was quoted as stating recently.

Nine of the 12 Commonwealth CARICOM countries support Antigua & Barbuda's nominee, the Guyana-born diplomat, Sir Ronald Sanders. Only Barbados has joined Dominica in support of the former British attorney general. It was not clear which candidate Port of Spain would support.

The CARICOM heads who met in Barbados at the beginning of this month were expected to discuss the matter in a bid to agree a single candidate. However, they never got to this agenda item and, according to the new CARICOM chairman, Barbados Prime Minister Freundel Stuart, it was referred to the Bureau of Heads consisting Stuart and the prime ministers of the Bahamas and Belize.

But in a stinging letter to Stuart, Antigua's Prime Minister Gaston Browne, practically accused the Barbadian leader of lying.

Browne argued that the 12 Commonwealth Caribbean Governments had ample time to consider the matter, but had been unable to make a decision due to the "obfuscation by a few".

This latest exchange has been described as "sad" and "unfortunate" by a senior CARICOM expert, who criticized the leaders for dragging the issue, and questioned the logic of Baroness Scotland's nomination.

"It is sad, it is sad," said this person who has observed Caribbean politics for several decades, of the impasse.

"What they are all doing is ignoring the point that the prime minister of Grenada (Keith Mitchell) has made that if we keep this up the Pacific and other regions will not take us seriously."

Mitchell, who supports Sanders's candidacy, told journalists covering the CARICOM summit that whoever emerges as the Caribbean nominee might have difficulty winning.

"I think we are making a serious mistake having three candidates out there and we put out their names early and we did not even attempt to talk to each other privately… I thought that was a bad approach and I am not sure that we will benefit from it," Prime Minister Mitchell said before the announcement that Trinidad & Tobago's candidate had withdrawn.

Mitchell also criticized the countries for departing from the traditional manner in which candidates are chosen, adding "those who did it must know that."

The Caribbean is the smallest region within the Commonwealth and will need the support of other regions, notably Africa and the Pacific, if its candidate is to succeed when the election is held at the next Commonwealth Heads of Governments Meeting in Malta in November.

It's a point that did not escape the expert in Caribbean politics who spoke to The Sun on condition of anonymity because he did not wish to be embroiled in the public debate.

"What they failed to do was to opt for a unanimous candidate. It's unfortunate. I would hope good sense will prevail because the Caribbean (alone) cannot elect the secretary general. They will need the support of other regions.

"I don't know why the Baroness has been (talked) into believing she could (win) it. Barbados is playing (games) with her. To have a British secretary general, the Commonwealth headquartered in Britain, with the queen as head of the Commonwealth; I don't know how people will take that. She is a lawmaker in Britain and they have no precedence for this."

He admitted that Sanders committed "a tactical error" when he advised leaders that he was no longer interested, after they failed to reach consensus when they met to decide the issue while at the Cuba-CARICOM summit last December.

Stuart absented himself from that meeting, choosing instead to meet with Barbadian students studying in Havana. Skerrit was also absent.

This is not the first time that Dominica has been at the centre of controversy surrounding Baroness Scotland. Reports surfaced last year – later denied by Dominica's ambassador to the UN, Vince Henderson - that she was asked to leave a meeting of CARICOM foreign ministers in the margins of the UN General Assembly in New York.