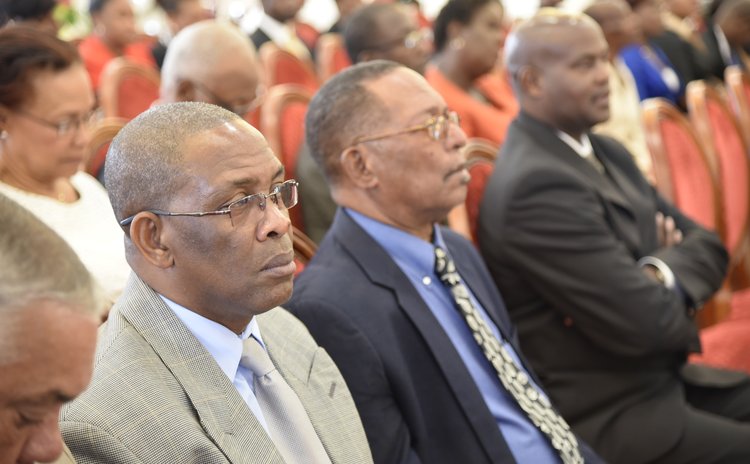 Cecil Joseph , manager of DBS , first in row, at the CCJ accession ceremony in 2015

A Commonwealth Observer Mission's report on Dominica's 2014 elections attracted much attention recently for its comments about the local media's activities during elections.

"The Media does not appear to be balanced and fair in their coverage of newsworthy events: certain media houses have established relationships with certain political parties and exclusively publish their content," the report stated.

The report recommended the enhancement of the issuance of television and radio licenses by legislation to facilitate fair and balanced reporting.

"This should obligate the Electoral Commission to consult with all electronic and print media and collaboratively draw up timetables for access to the print media for political parties; public education programmes for voters; political broadcasts; candidates promoting their views through electronic media and candidates printing their messages in local newspapers," the report stated.

The report also recommended a code of conduct on political reporting.

The Opposition United Workers Party (UWP) has often complained about being denied access to state-owned media.

Last year, Opposition Leader Lennox Linton urged the Electoral Commission to support equal access by both sides of the Dominica Parliament to news and current affairs programming by State-owned media.

UWP's Joshua Francis supported Linton, adding that the party had requested live coverage of its town hall meetings from State media, but to no avail. He claimed DBS and GIS patronise the ruling Dominica Labour Party (DLP) by live broadcasts of its events.

Noting that media coverage of Government events automatically feature the DLP, he said, "[The UWP] should be able to have free access to DBS. . . once we pay for the time for conventions and town hall meetings to be aired."

Francis also argued that state media should regularly invite the Opposition to speak on national issues, as they do for Government and the DLP. Opposition events should also feature prominently in the news, he said.

Referring to Linton being invited to speak on DBS's Talking Point, Francis said the invitation indicated some decency but is not enough.

UWP Public Relations Officer, Nicholas George said that allowing the incumbent party total and free access to State media gives them an unfair advantage because only their voice is heard on State media.

"Therefore, the decision-making by the electorate is flawed. They do not [hear] the two sides," he asserted.

George said media access is not only about political candidates being given air time. "It's having the news items from the parties in Opposition aired equally on State media. . .

Referring to Prime Minister Roosevelt Skerrit accusing the Opposition of plotting a coup, George argued that State media should have allowed Linton to speak on the issue.

However, DBS Manager Cecil Joseph rejected the UWP's contentions, citing instances of the UWP being granted time on State-owned radio, but failing to take up the invitation.

He pointed to a letter from George stating that the Opposition Leader Linton had accepted an invitation to be a guest on DBS' Talking Point in June.

George later informed him that Linton could not attend and a new date was agreed upon.

Linton did not show up and Joseph claimed that up to the time of his comment, to The Sun, the UWP had not called to apologise and his calls to Linton on the morning of the programme were unanswered.

George said Linton could not attend the interview because he was ill.

"To the credit of the [DBS] manager… he invited him through me and Mr. Linton was sick and I decided to take a rest as I was tired."

After his rest, George said he saw 14 missed calls from Joseph and, according to his information, the UWP's Hector John had given Joseph a formal apology.

Joseph also claimed that the UWP, through George, applied to DBS since October 2016 for a weekly slot, preferably on Talking Point, to discuss electoral reform.

He said he responded positively and invited the UWP to a meeting to discuss the details.

George did not show up and called to apologise, Joseph said, adding that they met eight days later and he gave George the rates and available dates. The UWP has taken no further action, he said.

Joseph said he told George that there is a cost for the live broadcasts of the town hall meeting.

"So they don't get it free. . . call my accounts department and they can tell you that those [DLP] town hall meetings are billed," Joseph asserted.

He also claimed that he had attempted to call Linton to invite him to speak on political reconciliation in 2015, but got no response.

Joseph insisted that DBS routinely covers UWP press conferences and public meetings and reports on them in the main news packages.

He said Linton declined to comment when contacted recently about an ongoing matter he has with chartered accountant Kieron Pinard-Byrne.

Attempts to get a comment from GIS were unsuccessful.