Cost of Governance: Now Beyond the Clouds 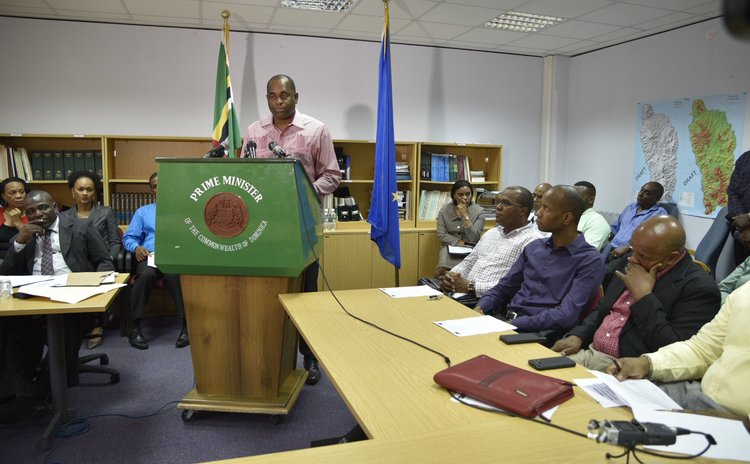 Prime Minister Skerrit and some members of his Cabinet

The recent mega-party with Swinging Stars to break ground for the West Bridge in Roseau has renewed attention on the cost of governance.

The opposition United Workers Party (UWP) has repeatedly criticized the size of the Roosevelt Skerrit cabinet, even making a vow in its manifesto for the last election to limit its executive to ten members.

Even in opposition the UWP kept its promise, naming a ten-member shadow cabinet.

Government's propensity to waste money seems inveterate, out of control, even, those keeping an eye on Skerrit contend. They suggest that lavish amounts are flushed down areas where the funds are not needed and the country does not benefit.

It is an area that bothers a retired senior civil servant who had been nothing short of niggardly in his approach to dispensing state funds.

Critics often contrast Skerrit's 17 member cabinet with those of Eugenia Charles' Dominica Freedom Party (DFP), which governed for 15 years from 1980.

However, the retired public servant has gone even further back in comparing the levels of economic activity.

"The size and cost of governance are areas of concern. Under [the country's first premier Edward] Leblanc and [first prime minister] Patrick John you had six or so ministers, and there are no more industries [today] than under Leblanc. In fact, there are less," said the person who requested anonymity because he did not wish to be engaged in a public debate on the subject.

"You have no industries."

However, this person stretched the discussion beyond the size of cabinet, pointing to the amount of money government spends on rent. He stressed that every administration from Leblanc to Eugenia Charles "governed from the old building built after the fire" but the current administration kept dishing out funds on office space around the capital.

"Every building for rent in Roseau is now being rented by the state. You built a massive financial centre to attract financial services and it is full of offices."

General Secretary of the Dominica Public Service Union (DPSU) Thomas Letang made a similar point, wondering why the government must be bigger today than in the past, when there is much less to do.

"Decades ago we had a much smaller government which worked for us as evidenced by the many projects. In those days we had a bigger population, we had more international aid and therefore more projects," he told The Sun.

The union boss also wondered who really benefitted from the monies spent, particularly when contracts are awarded to private contractors for projects that public servants and Public Works can undertake. And he said there must be cuts at the top.

"I don't think you have too many employees, the people to implement government policies. But at the level of cabinet, it is much too large, and with that comes more ministries, which means more permanent secretaries.

"I believe any reasonable Dominican will agree that in comparison to any other Caribbean country, our cabinet is too large and as a result the cost of running ministries is too high and that is something we have to look at."

The declining population is something economist McCarthy Marie also saw as an issue which is "squeezing Dominica to death" because the small population could not sustain private enterprises.

He explained that the cost of governance per tax payer was extremely high and pointed to the parliamentary system as the root of the problem.

"There are too many constituencies," Marie told The Sun.

"The number of people in the cabinet is a problem but that problem stems from the number of constituencies we have," he repeated.

Marie explained that due to the nature of politics, everyone who contests a general election expects something in return, therefore the winners were being rewarded with ministries for their effort.

"In politics it is give and take, and you have to give the people who help you something important, and there is none more important that a minister, even though you do nothing but sit and polish your nails."

He recommended a reduction in the number of seats to 11, which would invariable lead to a smaller cabinet and a smaller government.

"We had less motor cars, less business, [but more ministers]. The parliament is too big and the population has remained the same, or, as a matter of fact, dropped from the 1980s, but the number of people representing the population remains the same," he said.

He made reference to the ministry of constituency empowerment as one of the unnecessary ministries and suggested that the number of offices rented by government was "a kind of backhanded way of giving people money so they can live.

"If government did not rent, maybe you could not get private [sector] to rent it, everything is on a dead slow."