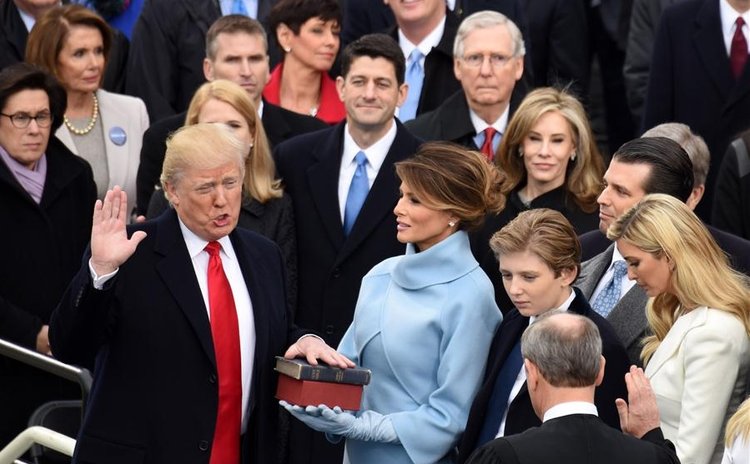 BEIJING, Jan. 21 (Xinhua) -- Donald Trump was sworn in Friday as the 45th president of the United States, and his inauguration has drawn a mixed reaction worldwide.

While many countries expressed hope for cooperative relations with the new U.S. administration, worries about Trump's "America first" policy dominate responses from officials, experts and the public.

Russian President Vladimir Putin is ready to meet Trump to congratulate him on taking office, but preparations for the possible meeting may take months, Russian media quoted Kremlin spokesman Dmitry Peskov as saying.

In the Middle East, Egyptian President Abdel-Fattah al-Sissi said Friday "Egypt hopes that Trump's presidency would usher in a new beginning for the Egyptian-U.S. relations, leading to more cooperation and coordination that will benefit both the Egyptian and American peoples, and promote peace, stability and development in the Middle East region."

Palestinian President Mahmoud Abbas said he looks forward to working with Trump "for peace, security and stability in an unsettled world and a region going through a tragic period, and contribute towards creating a secure future for everyone."

In Mexico, America's southern neighbor, President Enrique Pena Nieto tweeted after Trump's inaugural speech Friday, "Sovereignty, national interest and the protection of Mexicans will guide the relationship with the new government of the United States."

Colombian President Juan Manuel Santos called on Trump to value U.S. relations with Latin America, where its strategic interests lie, while saying his country is willing to promote bilateral cooperation.

Belgian Prime Minister Charles Michel expressed the hope in a statement for continued close cooperation with Washington in fighting terrorism and extremism.

While noting the U.S. is Belgium's largest trade partner outside the European Union, Michel said economic policies in favor of a sustainable development would benefit all.

France wants to develop "rapidly close relations" with the new U.S. administration, French Foreign Minister Jean-Marc Ayrault said Thursday, saying "France and the United States are allies, it will not change" due to shared interests and values, and that the European Union "will remain a strong and useful partner for the United States."

In a congratulatory message to Trump, Estonian President Kersti Kaljulaid voiced the hope for closer ties with Washington, saying "We also need close transatlantic cooperation at a time when Europe and the United States face many common challenges, including terrorism and migration."

During the World Economic Forum in Davos on Friday, Croatian Prime Minister Tihomir Oreskovic said he hoped for further ties with Washington as well as a continued key U.S. role in global and the North Atlantic Treaty Organization affairs.

In Asia, Indian Prime Minister Narendra Modi hoped to further deepen India-U.S. ties and realize the full potential of their cooperation, while tweeting that the strength of the India-U.S. "strategic partnership lies in our shared values and common interests."

A Philippine government statement, issued by the Philippine Embassy in the U.S. hours after Trump's inauguration, said, "The U.S. and the Philippines are treaty allies and we are ready to work on bolstering this alliance on the basis of sovereign equality and mutual respect."

Hours before Trump's inaugural ceremony on Friday, French President Francois Hollande denounced the protectionism Trump repeatedly promised America during a visit to a Vosges-based company, saying "it is not possible or desirable to want to isolate oneself from the world economy."

At home, U.S. political analyst John Avlon said that the gist of each U.S. president inaugural speech in the past was to unite the country by depicting a common vision, but the key point of Trump's address was instead aimed at inspiring his supporters.

In Australia, Rory Madcalf, professor with the National Security College, Australian National University, wrote on the Australian Financial Review newspaper that it is already becoming obvious that a Trump presidency will increase global uncertainty and the potential for instability. Trump has no track record in international or security policy.

Japan's influential newspaper Asahi Shimbun on Saturday carried an article, saying that, if Trump practices protectionism and isolationism under the name of "America first," the existing world order will be broken, even collapse, and Trump's readiness to bring "business transactions" into diplomacy was worrying.

Japan's largest newspaper Yomiuri Shimbun said on Saturday that Trump's inauguration worried the world, stressing that only a stable world will meet the U.S. interests.

Trump, who chanted "America first," despised the U.S. relations with its allies and the existing international rules, and raised some claims with American power hue, it said.

In Brazil, Mauricio Santoro, a professor of international relations at the State University of Rio de Janeiro, told Xinhua that Trump's view of global economic relations "belongs more to the 18th or 19th centuries."

"Believing that you can only get rich at the expense of your neighbor is a foolish idea that ignores centuries of empirical evidence and the very rise of the United States itself," Santoro said.

The professor believed that Trump's lack of thinking about how to handle the U.S. ties with the whole Latin American region would alienate the United States from Latin America.

In Egypt, Saeed al-Lawindi, a researcher of international relations at Cairo-based Al-Ahram Center for Political and Strategic Studies, said that Egypt and the United States have a common interest of maintaining the stability of the Middle East region, but their relations also face many challenges.

The Trump administration maybe will use the transfer of the U.S. embassy in Israel to Jerusalem as a chip for deal, and that is what Egypt is unwilling to see, the researcher said.

In Kenya, Gerishon Ikiara, a lecturer of international economies at the University of Nirobi, said that the anti-globalization stance adopted by Trump and his supporters was likely to hurt the U.S. economy and other political and diplomatic interests.

American enterprises covering a wide range of sectors and products worldwide are likely to be the major victims of Trump's anti-globalization stance, Ikiara said.