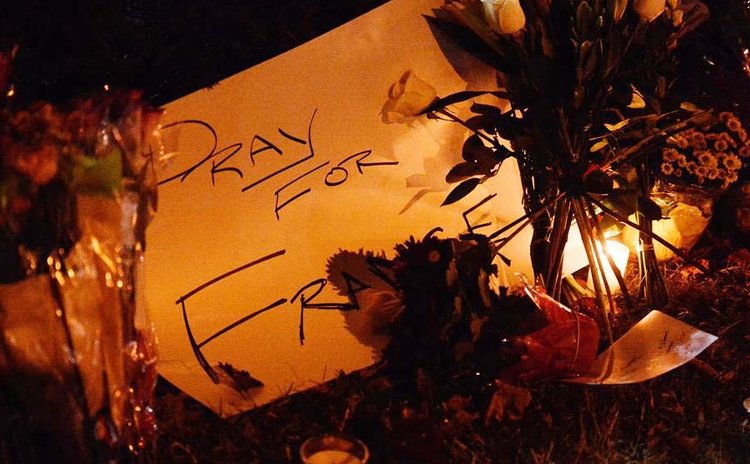 A card that reads "Pray for France" is placed outside the French Embassy in Washington D.C., Nov. 13, 2015. (Xinhua/Bao Dandan)

According to the Chinese Embassy in Paris, there have been no reports of casualties of Chinese nationals so far.

About seven well-coordinated shootings and bombings rocked central Paris Friday night, one of which turned into a hostage taking at the Bataclan theater and concert hall where hundreds of people were attending a rock concert.

At least two explosions were heard near the national stadium Stade de France where a France-Germany friendly soccer match was being played, attended by French President Francois Hollande.

Investigators said at least eight attackers were dead, with seven of them having blown themselves up.

Hollande, who has canceled his trip to Turkey for the upcoming G20 summit, will chair a defense meeting Saturday morning after the deadly attacks have shaken the country's security policy ahead of a high-profile international climate conference scheduled for the end of this month.

The French presidential office clarified early Saturday that the country has restored border controls but has not closed borders.

The French Foreign Ministry said airports and train stations will be open, and services will be assured.

The Chinese embassy in Paris issued a security alert late Friday, asking Chinese nationals in France to stay indoors and pay close attention to police information and local media reports about the incidents.

The embassy also urged the Chinese to follow police instructions in case of a security or identity check.

Belgium said Saturday it has boosted checks on its borders, especially on its border with France, following the Paris attacks.

The country also urged increased vigilance for big events over the weekend but said it was not necessary to increase the alert level.

Meanwhile, several U.S. cities including New York, Boston, Chicago and Los Angeles bolstered security on Friday night, but law enforcement officials said the increased police presence was precautionary rather than a response to any specific threats.

The New York Police Department (NYPD) said officers from its Counterterrorism Response Command and other special units were deployed in areas frequented by tourists, and at the French Consulate in Manhattan.

"Teams have been dispatched to crowded areas around the city out of an abundance of caution to provide police presence and public reassurance as we follow the developing situation overseas," the NYPD said in a statement.

The Port Authority of New York and New Jersey said police were on heightened alert at all of the agency's bridges, tunnels and rail facilities, as well as at the World Trade Center in lower Manhattan. It said it was increasing patrols and checking of bags, buses and trains.

Canadian Prime Minister Justin Trudeau said Friday night that he has spoken to members of his national security team to ensure the safety of Canadians in the wake of the Paris attacks.

"We will keep people apprised as more unfolds but I have been speaking with our national security team to ensure that everything is being done to keep people safe," he said.

"Together, everyone plays a part to keep Singapore safe and secure. We encourage everyone to remain vigilant and report any suspicious activities or persons to the authorities," Home Affairs Minister K. Shanmugam said in a statement.

"At the sorrowful moment of the French people, I, on behalf of the Chinese government and the Chinese people, and personally, condemn in the strongest terms the barbaric acts," Xi said in a message of condolence to Hollande.

Xi also expressed deep condolences to the victims as well as sympathy with the injured and relatives of the victims.

China always opposes all forms of terrorism and is willing to work with France and the international community to enhance cooperation in security, fight terrorism and ensure the safety of people in all countries, Xi said.

In a statement issued Friday, the UN Security Council said its members "condemned in the strongest terms the barbaric and cowardly terrorist attacks" in Paris.

The members of the Security Council expressed their deep sympathy and condolences to the families of the victims as well as to the French government, the statement said.

"The members of the Security Council underlined the need to bring the perpetrators of these terrorist acts to justice," the statement added.

In an earlier statement, UN Secretary-General Ban Ki-moon condemned "the despicable terrorist attacks carried out today in various locations in and around Paris."

"The secretary-general trusts that the French authorities will do all in their power to bring the perpetrators to justice quickly," said the statement issued by Ban's spokesman.

"The secretary-general extends his deepest condolences to the families of the victims and wishes a speedy recovery to those injured," the statement said. "He stands with the government and people of France."

Mogens Lykketoft, president of the 70th session of the UN General Assembly, said on Friday that "the whole world is outraged by the attacks in Paris" and "terrorism and murder of this kind is an outrage to humanity."

In a letter to Hollande early Saturday morning, European Council President Donald Tusk said that "this attack is an outrage against France, and against Europe as a whole. Today, France is on the frontline of the fight against terrorism. But she is not alone. This fight is the fight of all Europeans, and all the other peoples of the free world, too."

"France is a great, strong and resilient nation. It will overcome this tragedy. Standing in solidarity, the European Union will assist her," Tusk said.

"We will demand that world leaders meeting in the G20 in Antalya respond to the threat of extremist terrorism. We will ensure that everything that can be done at European level to make France safe is being done. And we will make sure that Europe's counter-terror strategy is fit for purpose to face the challenges of the months ahead," he said.

British Prime Minister David Cameron on Friday said he was "deeply shocked" by the deadly attacks in Paris, offering "thoughts and prayers" to the French people.

"I am shocked by events in Paris tonight. Our thoughts and prayers are with the French people. We will do whatever we can to help," Cameron said via his Twitter account.

Britain's Archbishop of Canterbury Justin Welby on Friday night said he wept with those affected by the deadly attacks in Paris, for which he prayed "deliverance and justice."

Expressing shock and grievances, he tweeted: "Tragic Paris, desperate news of deep tragedy, with heart break for so many. We weep with those affected, pray for deliverance and justice."

German Chancellor Angela Merkel said on Friday evening that she was deeply shocked by the attacks in Paris and declared solidarity with France.

"I was deeply shocked by the news and images that we have got from Paris. My thoughts are in these hours with the victims of the attacks, their families, and all people in Paris," said Merkel in a statement.

Merkel added that the German government is in contact with the French government and has sent her sympathy and solidarity of the German people.

U.S. President Barack Obama on Friday condemned the deadly attacks still unfolding in Paris and said it was too early to determine who was behind those attacks.

He also said U.S. officials were "in contact with French counterparts to communicate condolences to families of the victims."

"These terrorist attacks are deeply worrying and obviously unsettling to people around the world," Trudeau told a press conference at Ottawa Airport just before leaving for the G20 summit in Turkey.

Danish Prime Minister Lars Loekke Rasmussen said late Friday night in his Twitter account that he was "horrified" by the Paris attacks. "My thoughts go to all French people tonight."