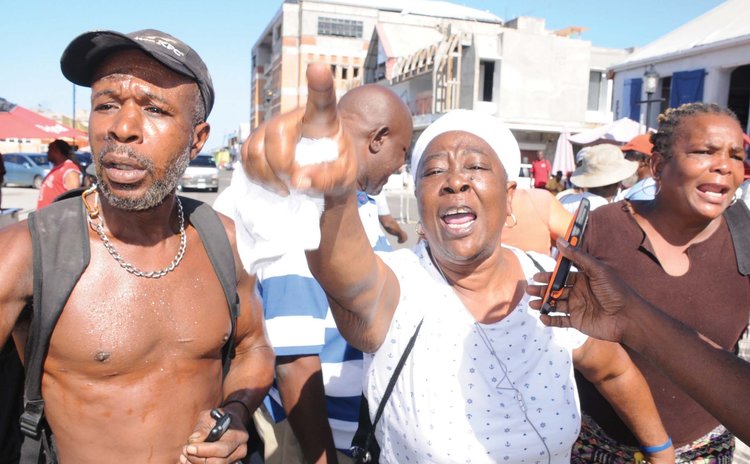 Some of the protesters on the Bayfront, Roseau

On a bright, hot Thursday morning last week the Dame Eugenia Charles Boulevard in Roseau looked like an area preparing for an invasion as dozens of police officers dressed in military fatigue waited behind steel barricades.

But it wasn't an invasion; it was just a few opposition politicians who were summoned to the hurricane-damaged magistrate court building to answer charges of incitement and obstruction.

Lennox Linton, the Leader of the Opposition United Workers Party (UWP), who was charged with incitement and obstruction stemming from a public meeting on 7th February 2017 on Kennedy Avenue near Government Headquarters, had earlier asked supporters to gather near the court.

Then, Linton and the others who had been accused left as supporters waited in the now sweltering heat. Walking to the court with Linton were lawyers and their clients. These included the lawyer of Dr. Thompson Fontaine who was charged with incitement and obstruction. Dr. Fontaine did not attend the court hearing because he was out of State; later, a magistrate issued a bench warrant for his arrest.

Former Prime Minister Edison James, who was charged with obstruction and incitement, was not properly served so he did not appear at the court hearing.

While lawyers and accused argued their cases in the bowels of the magistrate court, outside Dr. Sam Christian, the UWP candidate for Soufriere, kept the crowd involved by asking them to sing the National Anthem, knelling to recite the Lord's Prayer and chanting "Just like a tree by the river, I will not be moved" and "Skerrit must go".

After a protracted hearing at the magistrate's court, Linton, using a bull horn, spoke to supporters about his ordeal.

"I just spent two hours on my feet standing in the magistrate's court like some common criminal that had gone and done something somewhere," Linton said. "They have accused me of obstructing the police and they have accused me of inciting others to do all sorts of things. None of this ever happened"

Supporting that claim of the significance of the charge, Senior Counsel Israel Khan, who was recruited from Trinidad to prosecute the case, told State-owned DBS Radio that incitement is serious "because if you are convicted it carries a term of 15 years (in jail)".

Recall that prowling young men louted, burned and destroyed property in Roseau on 7 February 2017 hours after a massive public meeting organized by the UWP over apparent mismanagement of the Citizenship by Investment Programme. In an address to the nation a day later, Prime Minister Roosevelt Skerrit suggested that the opposition attempted to overthrow his government by using a truck, laden with sound equipment, to ram into the Financial Centre. That allegations of an attempted coup has not been supported by evidence and is apparently replaced by these charges of obstruction and incitement.

In all of this the police has been intimately involved especially in the events which followed the court case last week.

In what appeared to be a spontaneous decision, the crowd that had gathered outside the court on Thursday last week matched through Kennedy Avenue and Independence Street to Police Headquarters where they were met not by steel barricades but a phalanx of police officers dressed in military fatigues. Apparently taken by surprise, the police did not have a chance to set up metal barricades. For a tense 30 minutes protesters and police confronted each other. Heavily armed police officers, some armed with tear gas equipment, waited in the background as protesters shouted "We shall not be moved."

Fortunately, the tension ended before any clashes occurred.

Meanwhile, outspoken attorney at law and Rastafarian Henry Shillingford was arrested and charged with obstructing the police. A video on social media showed Shillingford tussling with the police at the barricades on the Dame Eugenia Charles Boulevard. He has since pleaded not guilty to the charge.