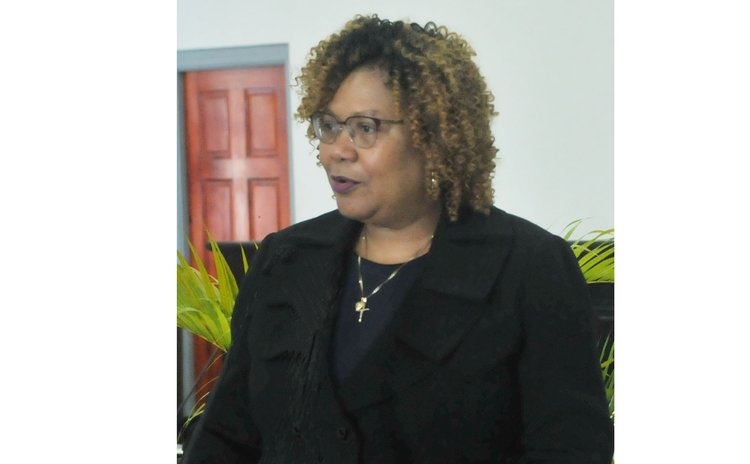 Mandel Joseph Cyrille, a young man from Vieille Case will return to the Roseau High Court on July 7, 2021, for his sentencing hearing before trial judge Justice Wynante Adrien-Roberts after an all-female nine-member jury found him guilty of causing grievous bodily harm with intent to cause grievous bodily harm to a cousin of the same community.

Acting Director of Public Prosecutions Sherma Dalrymple assisted by State Attorney Daina Matthew called five witnesses including a medical expert and police investigator to make its case against Cyrille. Counsel Wayne Norde conducted the defence. The nine women had to return to the courtroom for further directions from the judge before arriving at their unanimous verdict on Friday afternoon June 4, 2021.

The trial began on Monday, May 10, 2021, with the selection of the jury before the first witness, the virtual complainant, Kevin George, took the witness stand on Tuesday May 11.

The injured man Kevin George, 42, said he has lived all his life around Cyrille; the two living just about five yards apart from each other at a hamlet off Vieille Case called Tobino. They are cousins and were friends when they were young. It was Saturday, February 10, 2018, and George had gone to the village to buy a top-up for his mother and himself.

On returning home that night, a generator behind his uncle's house was providing light where he saw Cyrille.

"He was about three yards away from me. I saw his face. He was coming down towards me, and passing me, he slashed me at the back of my head," George told the court.

He continued: "I say to him, 'carnival just open, everybody wants to enjoy themselves.' He said: 'so long I marking you. I want to kill you.' I left him and I run to Auntie Jean's home... I felt a lick of cutlass on my right arm. Auntie Jean's home had lights from the generator reflecting on the veranda. The accused was making blows at me... (Auntie Jean's house has a veranda downstairs). He was hitting me with a cutlass, a sabre. I took my Auntie Jean's chair to block the cutlass. The tip of the cutlass slashed me on my right hand. Auntie Jean came and said, "Mandel, that you doing my nephew." I rush on him. His tam fell, the mask, the same tam-mask was on his head. The tam was on his face on Auntie Jean's veranda under the lights. I could see his two eyes, white. When I saw him on the road he was not wearing a tam... the accused grabbed the tam and he ran."

George said his aunt gave him Phensic for the pain. He was losing strength, feeling giddy and weak when he heard his mother and father arrive. His father took him to the Portsmouth hospital. He was given drips and oxygen and then taken to Roseau. Later he found himself on the men's ward. His hands and head were bandaged with a cast on his left hand, and he had drips attached to his foot and hands.

George told the court that he had injuries to his left hand, wrist and elbow. He can no longer do construction work since the incident.

Jean Massicott said she was in her bedroom about 7:30 pm that night. All lights were on. It was after (Hurricane) Maria and the generator was on. "While sitting on my bed in my room, I heard like two people running. I heard somebody shout Jean... I went in my bathroom and looked out the window... I saw somebody hitting somebody with a cutlass, and I hear the person saying, 'long time I have that for you! Long time I have that for you.' I heard the other person saying, 'what I do all you, all you hate me so much!' it was Kevin's voice. I kept on staring. I was still hearing the lashes. I heard a lash. I felt it. The person bawl and I pee pee on me... when I watch I say Mandel you that doing Kevin that... He turned and watched me in the window. All the lights on the porch were on, and he ran."

Lawrence George, the uncle of Kevin's mother was at his home about 8 o'clock when somebody called him. He took his flashlight and went to the home of Jean Massicott, his sister-in-law. He saw Kevin sitting on a chair on the veranda and his hand hanging. He had a cut to his head. He went on the road and stopped a passing transport. His brother helped him put Kevin the back of the double cab pick-up and went to the Portsmouth Hospital. Dr Julian D'Armas, Consultant Orthopaedic Surgeon took the witness stand on Friday, May 28. He was on call on Sunday, February 11 when he received a call from a junior doctor about a patient with multiple lacerations to the head and wrist. On arrival at the hospital, he found some of the wounds were sutured by the emergency doctors. Dr D'Armas said there was one fracture to a wrist that he had to repair in the operating theatre from 12:05 pm to 3:10 pm. He added that the injuries could have been caused by a very sharp instrument like a cutlass or big knife and the patient could be fully recovered in one year with the wrist up to 80% operational.

The court did not sit on that case again until May 25 because the accused became ill. Constable Cade Shillingford the Investigating Officer took the witness stand. He was attached to the Vieille Case Police Station when the report of the wounding came in. His first stop was to the Portsmouth Hospital where he met with and had a conversation with Corporal Mervin Adams. Shillingford and Sergeant Julian Baptiste next entered the casualty section and saw Kevin George lying on a bed. His head was heavily bandaged as well as both arms from wrist to elbow.

Kevin George was transported to the Princess Margaret Hospital that night. Shillingford next met with George on Sunday, February 11about 2:00 pm. He also had a conversation with medical personnel.

The accused Mandel Cyrille's defence was that it wasn't him. He was in Thibaud. He called Valentine Joseph, the man who drove the virtual complainant to Portsmouth as his witness. Joseph evidence in part was that on his way home before 7:00 pm he passed Cyrille at the Thibaud bus stop.

Shillingford on Thursday, February 15 charged Mandel Joseph Cyrille. The jury found Cyrille guilty on the first count of causing grievous bodily harm to Kevin George with intent to cause GBH.