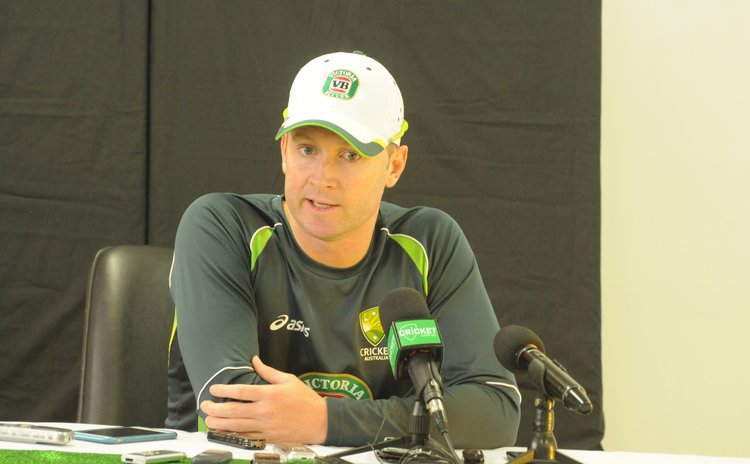 Australian captain Michael Clarke at press conference after the match

CANBERRA, July 5 (Xinhua) -- Cricketing legend and former Australian captain Ricky Ponting has said the use of oversized bats needs to be banned from Test cricket, citing concerns about player safety and an imbalance between bat improvement and ball improvement as a growing problem in the game.

Ponting, 41, said the use of super-light but thick bats was fine for use in the exciting Twenty20 format, but for Test cricket it gives the batsmen an unfair advantage.

The former Australian captain, who found himself in hot water during his playing career for using graphite-backed bats, said Test matches were becoming dominated by high scores.

"I don't mind (the big bats) for the shorter versions of the game," Ponting told News Corp on Tuesday.

"The short forms of the game survive on boundaries fours and sixes whereas the Test game is being dominated too much now by batters because the game is a bit easier for them than it was."

Ponting said he didn't blame the players for exploring the use of super bats for use in matches, but said it was up to the International Cricket Council (ICC) to determine whether or not matches were being swayed too much in favor of batting teams.

He said while bats were continually being refined and improved, cricket balls were limited in the amount of improvement in performance for bowlers.

"I don't know how they are doing it to make the size of bats they are making now," Ponting told News Corp.

"The modern day bats and weight in particular -- it's just a completely different game."

"I am going in a couple of weeks for a World Cricket Committee meeting and that will be one of the topics talked about."

"Full credit to the (players). If they are there use them, if there's a better golf club or tennis racquet everyone will use it. It's nothing against the players."