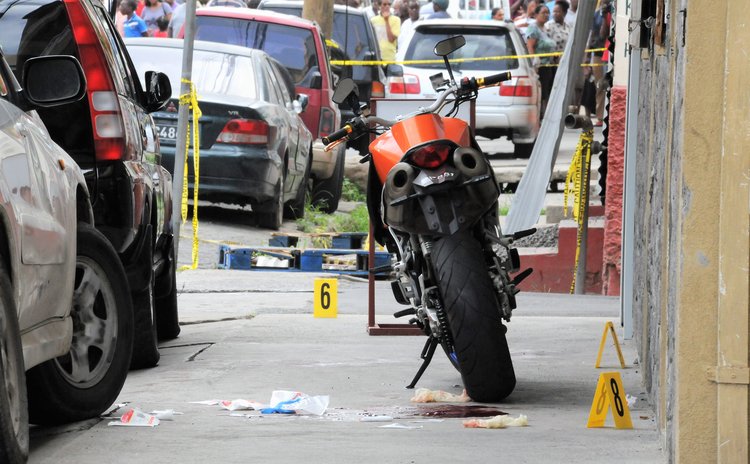 Blood in the streets. Killing on Kennedy Avenue

Our sister publication, The Chronicle, last week reported on its front page that the police, at a press conference at police headquarters, revealed that law officers have been investigating "a wave of criminal activities in Roseau over the past two weeks".

Note that The Sun was not invited to that conference; in fact, for reasons best known to the police authorities, in recent years that newspaper has been disinvited to all press conferences held by the police. In addition, Carlisle Jno Baptiste, a freelance journalist who is a major contributor to The Sun, is also not being invited to police press conferences. We don't know why. Yes, we have complained but the situation remains unchanged.

As The Chronicle reported, the police seem to be worried that crime, especially burglary, is again raising its ugly head. And the criminals are getting more brazen.

In broad daylight, just two weeks ago Ezon Roberts of Grandbay was shot and killed in the middle of the relatively busy Kennedy Avenue. The police have appended the alleged killer; officers should be complimented for its quick work in that particular case.

If you recall, 2018 started with a bang too. Unfortunately the sound that we heard was that of a gunshot that killed Derrick Peters of Sandwich Street in Portsmouth.

It was an ignominious beginning of a year that prompted Catholic Bishop Gabriel Malzaire to advise Dominicans to stop killing each other and that they must love their neighbors as themselves as Jesus Christ instructed his followers.

As we said in an editorial then we hoped the number of murders in Dominica remained low; using the cliché, "one murder is one too many" we suggested that Dominica had started the year on the wrong foot with one, but too many murders. We do not know whether the number of homicides, or other crimes like burglaries, are fewer or increasing. That's rather sad because we, the public, cannot help the police solve crime as effectively as we could if we do not know what the true situation is.

To repeat that statement we made earlier, over the past few years the Police Commissioner ill-advisedly discontinued traditional practice when he refused to release annual crime statistics to the general public, because according to a reporter from THE SUN who repeatedly sought the information, the police believed that the figures were too distressing.

But as we reported earlier, in 2017 there were as many as 12 murders by June of that year and that figure had exceeded the number of homicides for the whole of the previous year, 2016. That translates to an alarming estimate comparable to the highest in the world. But statistics can be misleading since Dominica has the reputation of being an extremely peaceful place where murder are so infrequent that a single killing makes the headlines on major news outlets. By comparison, Jamaica, a country with a much larger population, had 38 murders halfway through January 2018.

In Dominica, in 2017 the most sensational killing involved Andy Carbon, from Boetica, whose lifeless body was found face down in a pool of blood on the Bay Front in Roseau one Friday morning. Carbon was a vagrant.

Responding to the increase in killings, at a press conference, Police Chief Daniel Carbon called for assistance of the public to reduce the number of murders, a dozen in six months in a country with a population of less than 80,000. But escalating crime is not a Dominican problem only.

Crime has been a major constraint to the development of the Caribbean and leaders must now do much more than talk about the problem. According to the World Bank's report: Crime, Violence and Development Trends, Costs and Policy Options in the Caribbean" murder rates in the Caribbean are higher than in any other region of the world and assault rates are significantly above the world average. What are the major causes of such alarming statistics?

For instance, we know that Caribbean countries are fast lanes for the cocaine traffickers of Latin America and that gun ownership, an offshoot of the drug trade, is the fuel that ignites violent crime.

Youth violence driven by alcohol abuse, we are told, has become a major threat to public health and criminal deportees from the United States have directly and indirectly contributed to the increase in crimes in the region.

Most importantly, the root of today's lawlessness has been attributed to the loss of respect for the State and the rule of law. People in high places are committing crime with impunity, and don't for one moment believe that this situation escapes the attention of the youth.

And there are the effects of poverty and destitution as the recent case of Andy Carbon, the vagrant, illustrates. Undoubtedly, increasing crime rates are caused by its high levels of poverty. Speaking at the University of the Virgin Islands a few years ago, on the topic: "Poverty and its alleviation in the Caribbean", Dr. Compton Bourne, the former President of the Caribbean Development Bank, contended that poverty contributes to societal exclusion, loss of self-confidence and absence of commitment to the future of the community.

"Even though poverty is not the only cause of crime, it is a cause," Dr. Bourne said.

Catastrophes like Hurricane Maria will only make the crime situation worse and Dominica's crime fighters as well as the average citizen have to be conscious of a pending escalation in crime as the police reported last week.