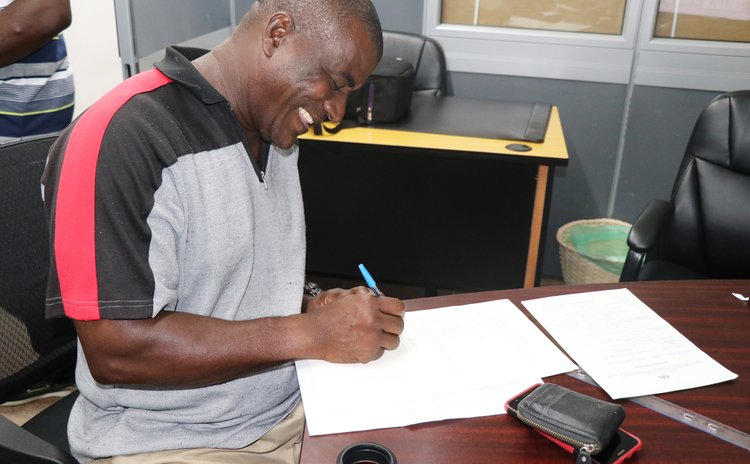 A farmer signs the contract

The Emergency Agriculture Livelihoods and Climate Resilience Project has reached a milestone in Dominica. The Ministry of Blue and Green Economy, Agriculture and National Food Security, World Bank funded project has begun delivering on the project's Sub Component A1- Restoration of Farmers Cropping System.

The distribution of inputs is presently being undertaken from warehouses at Belfast and Longhouse in Portsmouth, with distribution sites soon to be in operation in Castle Bruce, Laplaine and Londonderry.

Small tools will be distributed from the warehouses, while the motorized equipment will be delivered at the DAPEX building. The project will provide farmer training in the "Safe use of motorized equipment" The project is targeting 3180 crop farmers, 200 livestock farmers and 172 fishers. Applications received to date for crop farmers is 1724 and 919 have been approved so far as approvals continue.

Crop farmers are delighted with the project. Here are few impressions

"The project is well timed following the devastation of Hurricane Maria. It shifted agriculture to a different level for us because it speaks to ownership of lands which is critical to agriculture. It also forces people to decide what is their priority on the farm in terms of production, said Ezra Blondel, Colihaut vegetable farmer.

Following the devastations of Hurricane Maria in September 2017, the Government of Dominica received financial support from the World Bank to the tune of US$25.0 million equivalent to EC$68 million dollars for the implementation of the "Dominica Emergency Agricultural Livelihoods and Climate Resilience Project (DEALCRP), a five-year period intervention.

It is designed to help farmers and fisher folk affected by Hurricane Maria restore their agriculture and fishing livelihoods and adopt climate resilient practices.