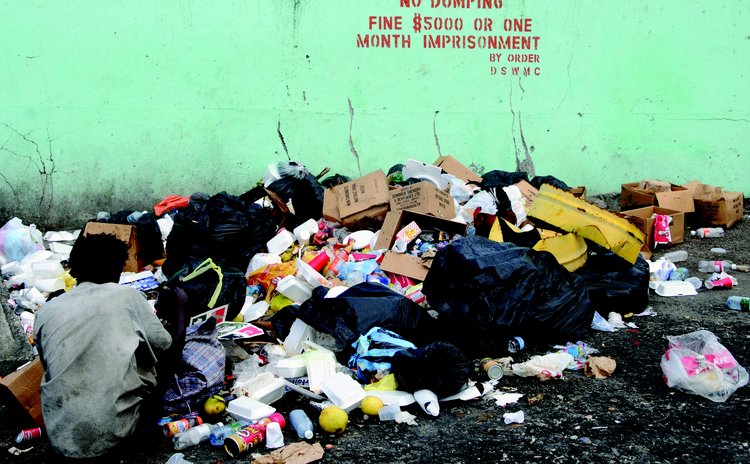 Vagrant searches for food in garbage dump in Roseau

"He was a good brother to me," said an emotional vagrant who witnessed the gruesome attack of his friend Davidson "Baby" Daisy who died on March 22, 2015 after being set ablaze on February 7, 2015.

According to the vagrant, Daisy's death changed the environment at the River Bank in Roseau where they wash vehicles; he said "seeing that happened it could happen to another person too".

The killing of Daisy has again brought the plight of vagrants, street people and paros to the forefront of national discussion.

Bonti Liverpool, the Executive Director of Wisdom to Know (WTK) called the killing "a very tragic situation to the extent that it is a criminal act; somebody lost his life and if push comes to shove another person might lose their life also."

"Many vagrants see that as a way of life, they don't like the constraints, they rather be out there washing cars, taking the risk of being killed," he said.

"It tells us that those Dominicans who live in the streets who we refer to as vagrants, the conditions that they live in is very vulnerable…vulnerable in the sense of their living conditions, their health; they could be taken for granted, they could be attacked at any time; people are likely to be shouting at them because they don't know what to do with them, because they are there, they become "nuisances" which I object to," Joseph said.

He added: "In Dominica what we have is something immediate; this is how the person looks, they want a plate of food, give them a plate of food so that aspect is taken care of, which is very limited.

"The bigger picture is to raise them up to some level of dignity, and level of independence and we don't have it and this is wrong…they are not being taken care of and from a professional point of view, I am ashamed of what I am seeing," Joseph said.

He added that Dominica has professionals who are capable of dealing with the vagrancy issue but due to the lack of financial and human resources, the needed intervention cannot be achieved.

"The issue in Dominica for me is a very simple one, we are not prepared and we don't have the resources; they are totally ignored," he said.

However, Joseph believes the biggest "nuisance" in Roseau is not the vagrants but the conditions of the sidewalks and drains.