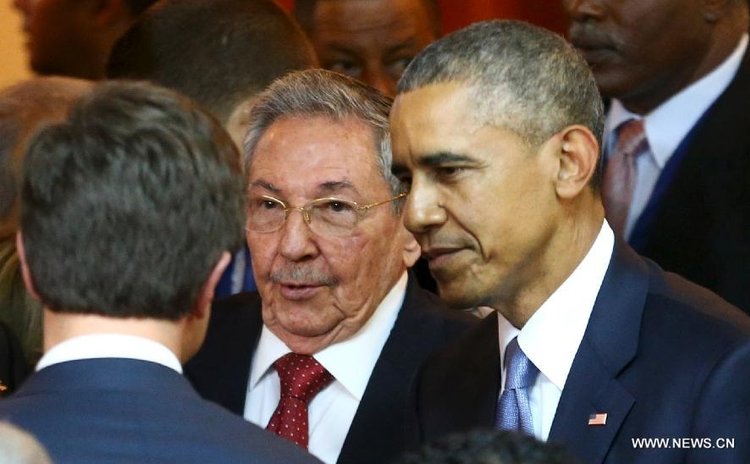 Obama, right and Raul Castro at the Summit of the Americas

HAVANA, Nov. 30 (Xinhua) -- The Cuba-U.S. relations are at a crossroads as the death of Cuban revolutionary leader Fidel Castro may decelerate the normalization of the ties and U.S. President-elect Donald Trump's assuming power will bring uncertainties to the U.S. policy on Cuba.

Castro passed away on Friday in the Cuban capital of Havana at the age of 90.

After writing blunt tweets about Castro's death Friday, Trump on Monday further threatened to end U.S. President Barack Obama's deal with Cuba on Twitter, urging Cuba to "make a better deal for the Cuban people, the Cuban-American people and the U.S. as a whole."

Rafael Hernandez, Cuban political analyst and head of the Temas magazine, said Trump's statement was very inappropriate at this moment and cast a shadow on the future of the Cuba-U.S. relations.

NORMALIZATION OF CUBA-U.S. TIES COULD SLOW DOWN

Analysts say that although Castro was not the direct promoter of the normalization of the Cuba-U.S. ties, his death could enhance his "spiritual effect" on Cuba, which could decelerate bilateral rapprochement.

Even after ceding power to his brother, Raul, Castro always published articles on Granma, the official newspaper of the Central Committee of the Cuban Communist Party, to criticize U.S. policy, Lv said.

After Cuba and the United States reestablished diplomatic relations in December 2014, Castro wrote articles to remind his party comrades of the U.S. plot of peaceful evolution, he added.

Havana lost reassurance after Castro passed away, Lv said, adding that Cuban policymakers, whether reformists in favor of Cuba-U.S. rapprochement or conservatives against the detente, will become more prudent in dealing with U.S.-related issues.

The Cuba-U.S. relationship will be normalized in the end, as Castro's death will not change too much Cuba's policy toward the United States and it is unrealistic for Trump to reverse the Obama administration's policy on Cuba, said Carlos Eduardo, a history professor at the University of Brasilia.

Xu Shicheng, a researcher with the Institute of Latin American Studies under Chinese Academy of Social Sciences, said both Cuba and the United States are at a period of transition, adding that Havana still hopes to promote bilateral rapprochement and the key lies in what moves Trump will make after he takes office.

Xu said that the Cuba-U.S. rapprochement is an irresistible trend and the possibility is small that Trump's assuming power will force the two countries to cut their ties.

Even if Trump adopts more restrictive measures against Cuba, Havana has accumulated rich experience in dealing with Washington, Xu said.

However, Trump's rhetoric has signaled that he would adopt repressive policies toward Cuba and it is hard to resolve practical issues such as returning the Guantanamo Bay Naval Base to Cuba and lifting the economic embargo on the Caribbean island nation, he said.