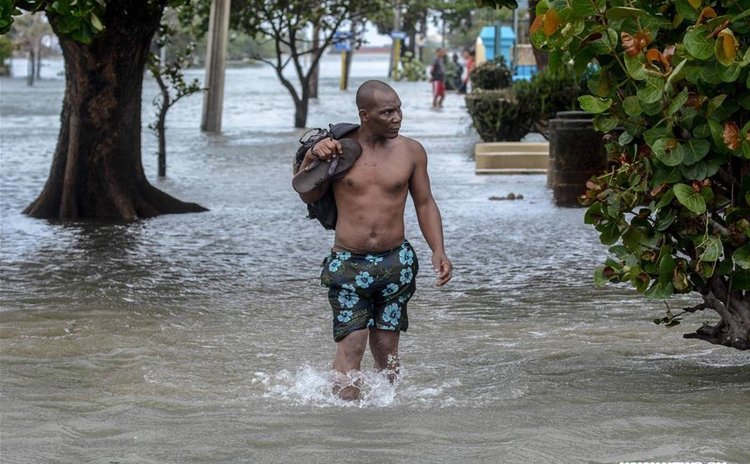 A man walks through a flooded street after the passage of Hurricane Irma, in Havana, Cuba, on Sept. 10, 2017. (Xinhua/Joaquin Hernandez)

HAVANA, Sept. 10 (Xinhua) -- The Cuban capital of Havana was damaged beyond recognition Sunday after Hurricane Irma whipped the northern coast of the Caribbean nation.

The strong storm rated between Categories 3 and 4 on the Saffir-Simpson scale when it pummeled Cuba's northern coast started to be felt in the capital late Saturday, but unleashed its fury with strong winds and record-breaking waves early Sunday.

Although the eye of the storm did not touch Havana, its unusual force knocked down thousands of trees and power lines, ripped off roofs and caused considerable damage to tourist centers while leaving the entire city without electricity.

Fire teams and Red Cross staff spent Saturday night and Sunday rescuing residents in the old quarter and other areas of Havana as the raging sea caused devastating flooding.

"There are plenty of rescue workers and Red Cross staff to cooperate with the people and try to get things back to normal," Fidel Martinez, a Cuban who was evacuated from floods, told Xinhua.

On El Malecon, a famous seafront avenue in Havana, waves triggered flooding never seen by city authorities nor its residents.

"I have been living in this area for more than 30 years and the floods have never reached this level. This hurricane has really caused severe damage to our city," said David Comuna, a resident of the capital.

In some areas, especially in the neighborhood of Vedado near the center of the city, the water advanced more than 600 meters inland, flooding hundreds of houses and garages.

"This has been a hurricane like no other. Only what we called the 'Storm of the Century' in 1996 might be a little similar. It has affected our entire city, in particular this coastal area. But now we must recover," said a resident named Alicia Noriega.

In a message released on Sunday, Cuban President Raul Castro ordered local authorities in each territory to initiate recovery efforts because the hurricane has affected practically the entire country.

In Havana, numerous trees have fallen and electricity networks have been damaged considerably, said Mercedes Lopez Acea, the first secretary of the Communist Party of Cuba.

Lopez added that there had been "partial or total collapses of houses" in the city.

More than 10,000 tourists have been evacuated to Varadero from resorts in the central part of the country, like Cayo Coco, Guillermo in Ciego de Avila and Cayo Santa Maria in Villa Clara, where part of the tourism facilities were destroyed.

After tearing through Cuba's northern coast, the most powerful storm ever recorded in the Atlantic made landfall Sunday in the Florida Keys, a coral cay archipelago located off the southern coast of the U.S. state of Florida, with rains and winds of up to 210 km per hour.