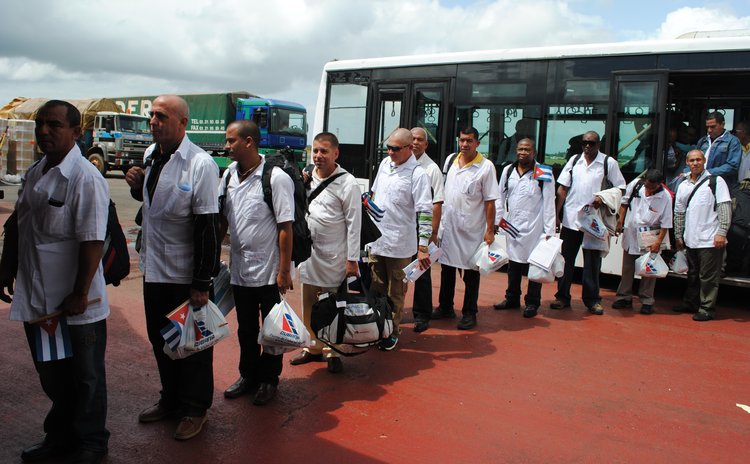 MONROVIA, Oct. 22 (Xinhua/Sun) -- A total of 51 Cuban doctors and nurses and administrators arrived Wednesday at the Roberts International Airport (RIA) to support the Liberian government's fight against the deadly Ebola Virus Disease (EVD).

The Cuban medical team was welcomed by that country's ambassador to Liberia and officials of the Liberian government who had gathered earlier at the airport.

The Cuban healthcare workers, all males, were dressed in traditional medical gowns, with some displaying the national colors of Cuba represented by the nation's flag.

The Cuban Ambassador to Liberia, Jorge Lefebre Nicolas said Cuba had sent the medical practitioners to Liberia in the spirit of African solidarity.

"We see ourselves part of this. All of our people, heads of our liberation struggle, were brought to Cuba from Africa. We have a compromise with Africa. We cannot see our brothers in Africa in difficult time and we are there folding our arms in Cuba," Nicolas told reporters in Monrovia, the nation's capital city.

"Not long ago we had decided to take part in this colossal effort to fight the Ebola disease. We have the medical capability and the willingness to come and help with this disease," the Cuban envoy said.

Speaking at the arrival ceremony, Liberia's Deputy Health Minister Matthew Flomo, who welcomed the Cuban team, said that they could not have come at a better time.

He said the Cuban Ambassador has been working assiduously to ensure all necessary modalities leading to a partnership in the health sector between Liberia and Cuba is on course.