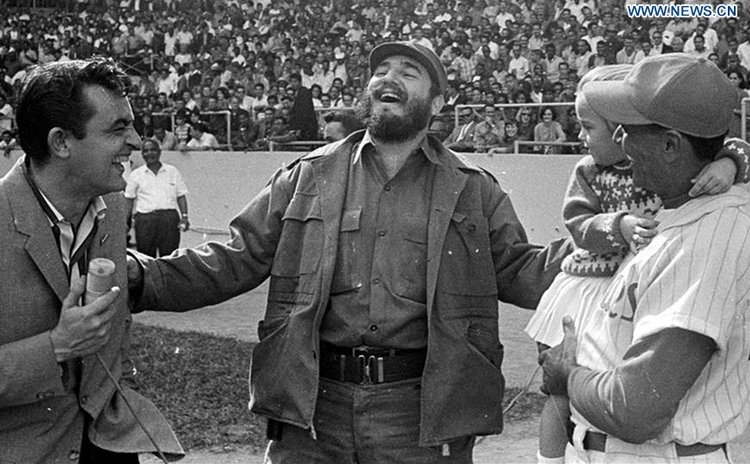 Castro was born on Aug. 13, 1926 into a wealthy family in Biran in northeastern Cuba.

He attended private schools before entering the University of Havana to study law in 1945. Five years later when he graduated, he had acquired a political awareness that led him to develop anti-imperialist revolutionary ideas closely related to Marxist values.

In 1953, he was sentenced to 15 years in prison after a military operation he launched on July 26 against the then Cuban dictator Fulgencio Batista failed, but he was released due to a presidential pardon in May 1955.

His self-defense plea, better known as "History Will Absolve Me," became a programmatic document and made him a leading figure of Cuba's revolutionary movement.

Castro then organized the 26th of July Movement and fled to Mexico where he was joined by other exiled revolutionaries, including his brother Raul Castro, Ernesto "Che" Guevara and Camilo Cienfuegos, aiming to form a guerrilla force to overthrow Batista.

In December 1956, he led the Granma yacht expedition with 82 men aboard to return Cuba. Castro and 11 others managed to head to the Sierra Maestra mountains and later started the war of Cuban Revolution against Batista.

In January 1959, Batista fled Cuba for Spain when the revolutionary forces marched into Havana.

After becoming the head of the revolutionary government and armed forces, Castro undertook a series of reforms including nationalization of industries and banks, land reform, a nationwide literacy campaign and the expropriation of American companies, among others.

In 1961, Castro declared Cuba a socialist country, and in 1965, he became First Secretary of the Communist Party of Cuba, which was a renamed merger between the 26th of July Movement and other Cuban political and revolutionary groups.

His policies met with strong opposition of the United States, which broke diplomatic ties with Cuba, organized military offensives and imposed sanctions against Cuba, among others.

Castro had survived a lot of U.S. assassination attempts on his life.

He had led Cuba for nearly half a century before stepping down in 2006 for health reasons. He was succeeded by his brother Raul Castro.

Castro spent the last years of his life largely out of the public eye, writing editorials on world affairs for Cuba's official Granma daily, and receiving dignitaries at his home in Havana.

He is believed to have inspired a new generation of political leaders in Latin America, such as in Bolivia, Venezuela and Ecuador.

His legacy can also be seen in Cuba's universal healthcare and education system, as well as its world-class biotechnology and pharmaceutical industry.