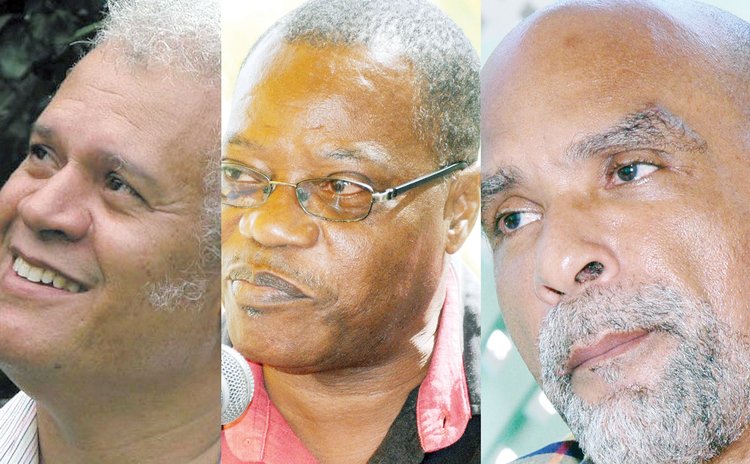 Environmental activist and government critic Athie Martin looked into his crystal ball and hesitated. Seldom at a loss for words, Martin paused. Stammered, even.

He'd been asked to share his perspective on what Dominica can expect in 2016 and he did not like what he saw when he delved into the future.

"What we can expect is not good at all," he finally managed.

The condition of everything, from education to agriculture to the economy, had been in painful agony in 2015 and would deteriorate even further this year, he predicted, with little hope of improvement.

He cited as an example, the country's long-standing dependence on Venezuela for aid - the total amount of which remained undeclared; the debt through Petrocaribe, and the changing political climate in Caracas after the opposition victory in last month's parliamentary election.

"It seems the terms of engagement will change. So where does that leave us? It leaves us a maybe 300 million dollar debt to a country that needs it."

Martin lamented a lack of investment in agriculture in 2015, which he said would have had to be done in order to see the benefits this year; hopelessness among the youth due to a shambolic education system and infrastructure in a state of disrepair.

"You haven't even been able to deal with black sigatoka," he exclaimed in explaining the state of agriculture. "We don't even have bananas."

The environmentalist accused government of failing to create the proper environment for employment creation by the private sector, and worried about the impact of the absence of opportunities.

"If we haven't made the investments in terms of businesses, where are they jobs going to come from? The public sector cannot absorb more people . . . . And the safety factor both for ourselves and tourism is going to loom large in 2016 because people will be idle. If we haven't made the investment, which we have not, then 2016 is a very grim, bleak prospect in terms of jobs."

"Look at infrastructure," he continued, "our roads are in a very bad state and it's not all [Tropical Storm] Erika. This is because we have not been doing regular maintenance; this is the dismantling of public works . . . Because we have had a winding down of maintenance in 2015 because of lack of funds, 2016 is going to be worse."

Martin's perspective on the quality of the infrastructure, particularly the roads, was challenged by business entrepreneur Parry Bellot, who anticipated a great deal of activity this year as the country rebuilds after TS Erika.

Bellot argued that due to the investment made in recent years, Dominica has "possibly" one of the best road networks among small Caribbean countries.

And he said he was optimistic that the infrastructure would be returned to its pre storm state in quick time.

"Certainly, the priority is to rebuild what has been lost . . . and it's not only building, but rebuilding better. I have always said one thing the Prime Minister has is vision and I'm sure Dominica will quickly reach its goal in getting to where we were and to move forward," Bellot forecasted.

The productivity campaigner admitted he did not expect "any fantastic growth" in agriculture, citing the lack of interest among the youth in the sector and describing the farming community as "disappointing" and "inefficient". He also held little hope for much growth in manufacturing.

However, Bellot saw tourism driving the economy this year.

"The growth areas are clearly in tourism. There are some people who feel we can do better in agriculture and I think we can, but I don't expect any fantastic growth. So it's basically tourism."

Economist McCarthy "Mack" Marie saw "a continuation of what we've had" since Tropical Storm Erika, at least over the first six months of the year. He anticipated "some" reconstruction of damaged roads and bridges and emphasis on Douglas Charles Airport.

"I would expect the government to be working vigorously to get the airport to where it was before Erika. [However], in terms of the economy, for the average citizens I think it will be pretty tight.

"Because the lasting effect of Erika - it has caused a lot of cancellations of stayovers – and that's our main money earner. So I think it will be pretty tight, at least up to the summer," Marie predicted.

For Athie Martin, the difficulty will linger long past summer. He agreed that stayover tourism would help but held little hope because of the cost of travel to Dominica and the poor state of the product.

Martin said since cruise contributed very little to the economy, a rise in cruise arrivals would not make a difference to the average Dominican.

"I really do not see us clawing our way anywhere from up from the bottom. The FCCA report that placed Dominica almost on the bottom will remain our reality for a very long time. And so 2016 looks like a very grim year for Dominica. Very grim on every count."