Dancing Nude in the Moonlight 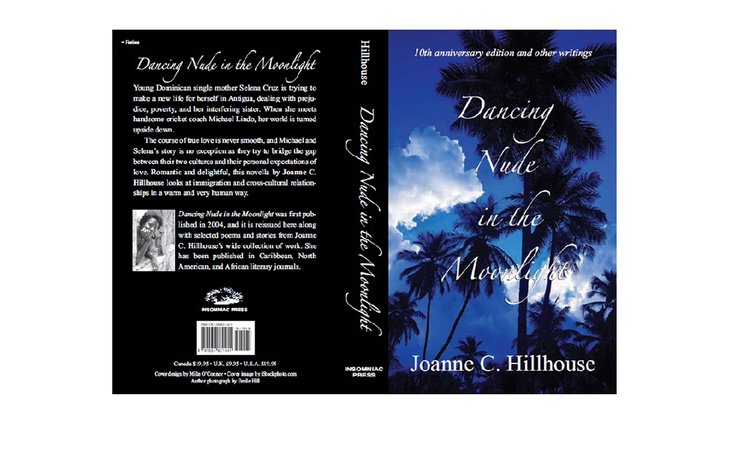 "A narrative that is rich in issues, values, intercultural conflict, and gender relations as they present themselves in Antigua today... (the) love story is sensitive, sensuous, well nu-anced..." —Dr. Elaine Olaoye (Antigua and Barbuda Review of Books, 2008)

Dancing Nude in the Moonlight, Antiguan writer Joanne C. Hillhouse's novella about love across cultures, was published in 2004 to critical acclaim in the Caribbean. The book is taught in An-tiguan and Barbudan high schools, and gives a touching picture of the problems a young couple face as they attempt to build a life together.

Selena is from Dominica, and Michael is from Antigua. She is a single mother, struggling to make a living in a new country. He is a former West Indies cricketer, forced by injury to coach a school team instead. In spite of their mutual attraction, their path to happiness is a rocky one as they try to bridge the gaps between their two cultures and their different lives.

In addition to this work, the new edition includes "fan fiction" and poetry based on the story, and other short stories and poems depicting life in Antigua. Hillhouse's clear-eyed social obser¬vations and deep understanding of the issues facing women in the modern Caribbean in particu¬lar make these stories tender and powerful. A social worker comes to terms with her own past as she struggles to help a girl who has been abused; a teacher forms a complex bond with a former student; and a widow tries to hold onto her memories of her happy marriage in spite of revela¬tions about her late husband.

Joanne C. Hillhouse is the author of Musical Youth, which placed second in the 2014 Burt Award for Young Adult Caribbean Fiction; Oh Gad! a 2014 "Weekend Reads" on NPR; The Boy from Willow Bend; Dancing Nude in the Moonlight; and the children's picture book Fish Outta Water. She has also been published in several international journals and anthologies, including Round My Christmas Tree, Pepperpot: Best New Stories from the Caribbean, For Women: In Tribute to Nina Simone, and In the Black: New African Canadian Literature. Hillhouse lives in Antigua. She runs the Wadadli Youth Pen Prize writing program to nurture and showcase the lit¬erary arts.