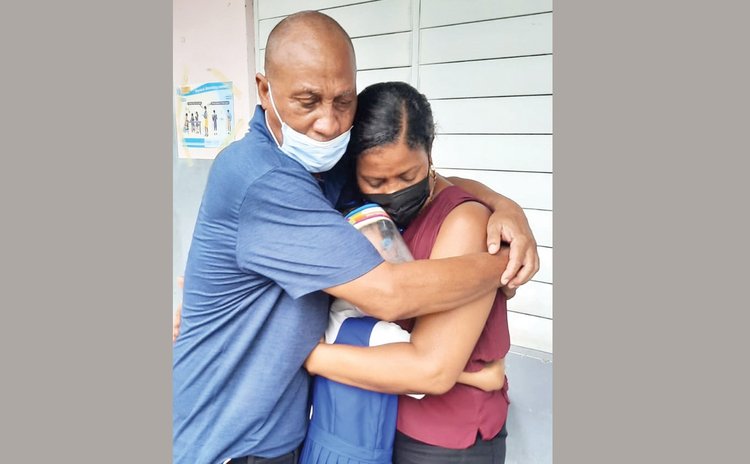 While being embraced by her parents, teachers, and friends, the 11-year-old scholar expressed her elation to the Sun stating that she had her eyes set on emerging in the top ten, but being number one felt unexplainable.

"I feel excited, happy, I am just so happy," the St. Martin Primary (SMP) student said while trying to contain her excitement.

According to the Morne Daniel resident, preparation for the exams included giving up her free time to ensure that she studied and did her school work as much as possible.

Though she doesn't have her mind set on any specific career at the moment, Danelle does intend on attending the Convent High School (CHS) in September.

As for mom, the proud parent says that the news was no surprise to her given the dedication and hard work her daughter put into her school work over the past seven years she's been a student of the SMP.

"As a teacher by profession, I ensured that she did what she was supposed to do at all times, and as parents, we just supported her at home in all that she did through all the trials and tribulations because of her medical issues along the way, and here we are today reaping the benefits," Mrs. Ferreira told the Sun.

Her father Dan Ferreira who struggled to hold back his tears throughout the interview, encouraged other parents, particularly the father to not only rely on the teachers, but they too should lend support to their children's education.

"There's been a lot of sleepless nights, rough days, but through it all she did it and I am extremely proud of her because I know how hard she worked to make this a reality, and had it not been for the support she received from her teachers, her mother and myself, this would not have been possible," he said.

Out of the 853 pupils who sat this year's exams, 78 obtained scholarships, while 93 were awarded bursaries.