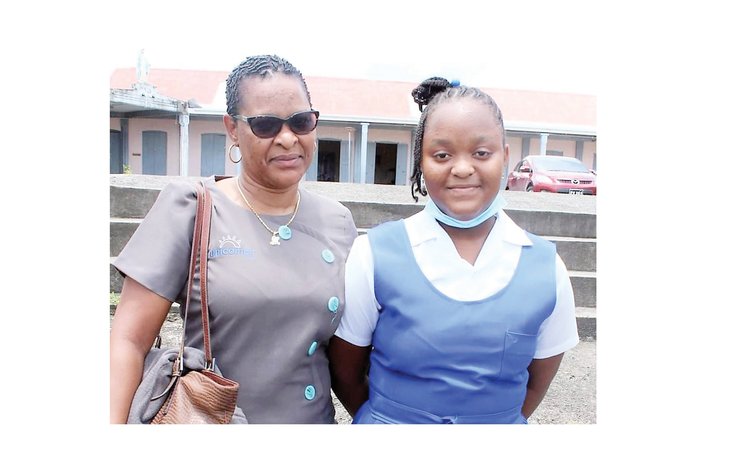 Hard work and determination are the key factors that 12-year-old Danika Paul of the St Martin Primary School (SMPS) attributes to her topping this year's Grade Six National Assessment (G6NA).

The results of the examination were revealed to the nation by the Ministry of Education on Monday, July 21, 2021.

"I feel very shocked, very accomplished but I still know that I have to continue working hard," the Grand Bay native told the SUN.

The top scholar who has her eye set on attending the Convent High School (CHS) and in the future hopes to become an engineer, encouraged her peers to "don't rush yourself, take your time as long as you work hard you will be able to do it."

"She has been at it from grade K to this point and she just persevered. She has been steadfast so I am very proud of her," said ecstatic mum Miranda Laurent.

Alianne Toussaint from the Convent Preparatory School came in second.

"Hearing my name, I felt very, very, very happy, I was in shock. I didn't expect to come in second," the 11-year-old from the community of Shawford admitted.

Meantime, the daughter of Chief Magistrate, Christa George, credits her success to not only her willpower but to the prayers and constant support from her family.

The 11-year-old who attends the SMPS and plans on becoming a pediatrician said the exam was relatively easy and that the long nights and weekends of preparation had paid off.

Eddie George, her father, pointed out that holistic development has been his family approach when it comes to education.

The only male student to make it to the top five performers in this year's exam Joreb Bercasio of the Convent Preparatory School is sending a message to his male peers that they should be focused on their pursuit of academic excellence.

Upon hearing the news, mother Jabel Odiamar Bercasio who is also a teacher at the school jokingly revealed to the Sun that she was unsure how to react.

"It came as a surprise. We didn't want to have a lot of expectations but at the same time we had been hoping for it", she said.

Meantime, 12-year-old Asia Harrigan also from the SMPS emerged in the fifth position.

The government has offered 67 scholarships and 108 bursaries.