David, the monster hurricane, taught Dominicans many lessons that they continue to ignore 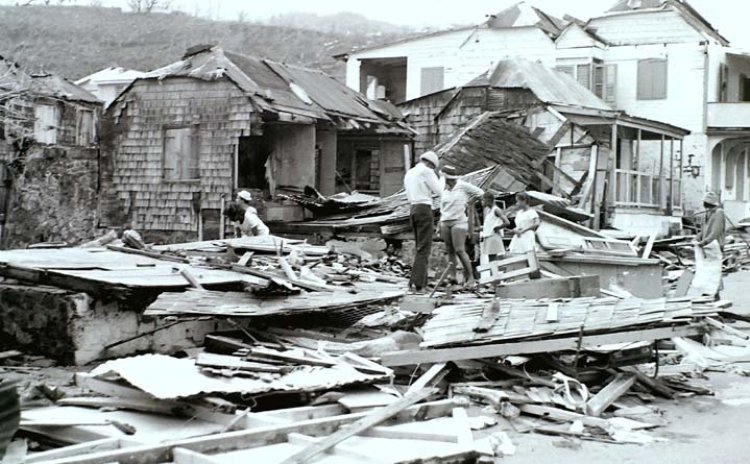 Although the physical and psychological scares of this devastating storm have somewhat healed (remember the wounds were reopened by Tropical Storm Erika on 27 August 2015 and Hurricane Maria on 18 September 2017) we also believe that Dominica has not effectively learned the lessons that it should from the David ordeal. Nor from Erika, nor from Maria.

Boasts of Dominican resilience to the contrary, some people believe that the island is still as vulnerable to natural disasters as it was on August 29th, 1979.

On that day, one year after the island attained political independence from Britain, David, a category five hurricane packing winds of 150 miles per hour and carrying millions of gallons of rain slammed into the island.

Unlike TS Erika, and like Hurricane Maria, Hurricane David stripped trees bare from our mountains and smashed homes to smithereens. After pounding Dominica for more than six hours, 56 people were dead, more than 180 injured and 75 percent of the population were homeless (Source: Wikipedia). For many months after the hurricane, hundreds lived in tents or lodged with more fortunate friends.

Most significantly, Dominica's economy was virtually swept away by the winds of David. Roads and bridges were destroyed and on Dominica's farms, almost every banana plant was broken and coconuts and other fruits littered the ground.

Thankfully, many countries came to the aid of our distressed country.

(See an opinion piece by former Prime Minister O.J. Seraphin on page 12 of this issue of the Sun).

After two months, the Interim Government of Oliver Seraphine announced that it had received pledges of US$37 million mainly from the United States, Britain, Canada and Caribbean countries.

Apart from the physical damage, one of the more lasting impacts of Hurricane David was the massive exodus, in the wake of the storm, of the country's human recourses especially its young, educated and trained members of the work force.

O. J. estimates that 40,000 left their homeland after David smashed Dominica; a similar figure left after Maria in 2017 but the figures have not been released.

We can be sure of one thing: the impact of this hemorrhaging of the country's human resource base is still being felt 43 years later.

The point we need to stress here is that given the severe pain that David caused (and Maria repeated 38 years later), and the generally high cost of natural disasters, one would expect government and the population generally to plan more adequately.

Because the threat of being devastated by another major hurricane- or a Tropical Storm, or even a Tropical Wave, for that matter- is as real as Dominica's green mountains.

And if there are any doubts about the vulnerability of Dominica and other Caribbean islands to hurricanes, just ask the people of Grenada, the Dominican Republic, Haiti, Jamaica and Cuba. Over the past few years, hurricanes have destroyed the economies of these countries. Traumatized by potentially deadly hurricanes, the natives of these countries now live in fear each and every hurricane season.

In 1979 Hurricane David direct surprised everyone with its ferocity because communication technology and predicting storms were rather rudimentary. Today, Dominicans are definitely more aware of the occurrence and consequences of hurricanes due to the mass media and the Internet. Nevertheless, Dominica is as underprepared for a major disaster as it was in 1979.

Firstly, in 1979 Dominican economy was in a better position to recover from the shock of Hurricane David than it is today. Apart from the sale of passports, Dominica Dominica's tourism, agriculture and manufacturing have not recovered from being devastated by Covid-19 and Hurricane Maria.

Additionally, in the post -David period financial aid, such as grants or loans at concessionary rates, were readily available. Today this facility has practically disappeared. There are also concerns about inadequate, non-existent and high cost of insurance coverage for the tourism and agricultural sectors.

But if this is any consolation, the other islands of the region are in the same predicament. An assessment prepared a few years ago by the United Nations Development Programme (UNDP) and the Caribbean Disaster Emergency Response Agency (CDERA) revealed that there were serious shortcomings in the preparedness and emergency responses of the entire Caribbean.

Among the areas needing upgrading were disaster shelters, early warning systems and improvement in the levels of cooperation between the public and disaster management agencies. The study concluded that the region needed a comprehensive disaster management policy, including the provision of economic instruments and risk reduction strategies, hazard mapping, and the storage of emergency supplies.

As we observe the anniversary of Hurricane David and as we watch the progress of another hurricane season, there are a number of questions that we need to ask of our local and national authorities. These include: are the plans of the Ministry of Agriculture adequate for dealing with the eventual scarcity of food supplies after a storm? Are communities being sensitized to the fact that roads may be destroyed by landslides and that damage can be averted if they clean drains and gullies? Are schools, police stations and other public buildings adequately maintained to minimize the impact of hurricanes? Are Dominicans and the government saving enough to help finance a rehabilitation effort after a storm? Do we have insurance coverage for crops and livestock?

The point is that Hurricane David in 1979, and Hurricane Maria as well five years ago, should have taught us many lessons but we are so laissez-faire about disaster risk mitigation, we act as if monster hurricanes are not our problem.