JUMP BALL: Part IX :A peek into local basketball then and now 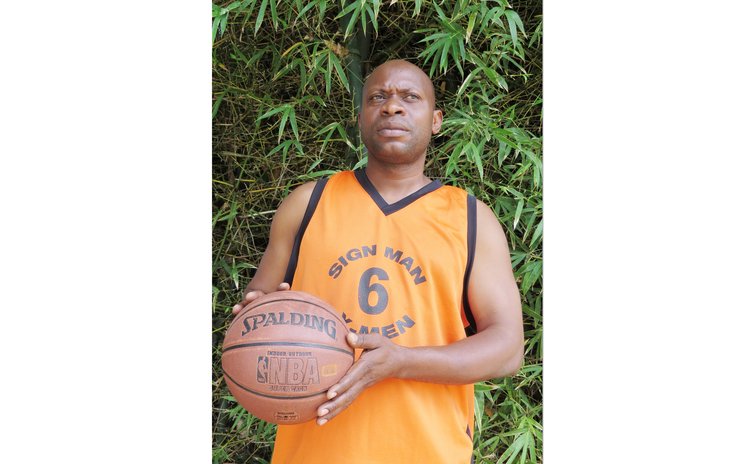 His basketball journey began three decades ago on the parking lot of the St. Alphonsus Catholic Church when, as a 15-year old, Davidson Toulon played in the first-ever Pottersville Basketball League with Potters Street in 1987. From that time on Toulon, more popularly known as "Guinea", has not missed a season of basketball.

The year after making his first competition hard-court appearance, Guinea was a founder-member of the Hoyas Division III basketball team from Pottersville that made their debut in the 1988 national league. Amassing 125 points in 7 games, Davidson was the second highest aggregate-scorer for Hoyas that season (Desmond Joseph 1st), and the 5th highest scorer in the Division III League. Later that year, Guinea represented Hoyas in the DABA 16 & Under Basketball Competition.

Moving from playing "juniors" (Division III, U-16), Davidson stepped directly up to Hoyas Premier Division when the latter was formed in 1991. And so Guinea, now 45 years old, has been playing Premier Division basketball for 26 years now, with his most recent season being 2016.

Interestingly, with an impressive quarter-century of basketball at the senior level Guinea, consistently wearing jersey #6, has been fairly stable in terms of movement between teams. He disclosed that he was approached by players from Cardinals, Clouds and Blazers to play with those teams, but he refused to move over on account of the rivalry between his team and those who were beckoning him to "cross the court". He frowns on players moving from team to team, from season to season, and he does not like the idea of players joining "winning teams" thereby weakening the team that gave them the start. As a result Guinea has played with only three teams in the national league: Hoyas Division III, Hoyas Premier and currently X-Men (Premier).

One year after his entry into the Premier Division in 1991, Toulon was selected onto the Dominica National Team and has been a regular on the team up to their most recent engagement (over three years ago).

Guinea's Second Tournament: Five years after his first national league match (at junior level), and only 21 years old then, "Guinea" was in his second year with Dominica's National Basketball Team. With much pride and distinction, he represented Dominica in the Windward Islands Basketball Championships in June 1993, right here in Sisserou Land. And man! Was Guinea on fire! Did he shine on a team that included players such as Derek "Didi" Alexander, Jason "Bounji" Richards, Donnie Robinson, Ashworth Daniel, Patrick Grell, William "Jimbo" Graham and others!

With a total of 61 points in three games and 29 points in one match, "unstoppable Guinea" led Dominica's scoring and was the 2nd highest aggregate scorer in the Tournament. He led the tournament in field-goals, scoring an impressive 21 from 51 attempts (41.18%), with his game-best being 11 from 14 attempts (78.6%).

In that tourney Toulon led Dominica in Free-Throws and was also the tournament's second best Free-Throw shooter with a perfect 17 from 17, including 10 in one match. With this impressive overall performance, Davidson Toulon – then only a 2nd year rookie – was adjudged Dominica's Most Valuable Player as he contributed significantly to The Nature Island winning that year's Championship.

Back on the Local Scene: Outside of the national league, Guinea has played 'ball in many communities on Dominica through community or "Off-Season" leagues. He has played in the Pointe Michel, Soufriere and Fond Colé Leagues; the Roseau Improvement Committee (RIC) League; and the Trafalgar/Roseau Valley League, firstly with Wolverines and players such as "Bakery", "Pryce" and others, and later with DOMLEC. He also played "friendlies" with Hoyas at Soufriere, Portsmouth, and against Clouds at Goodwill.

In addition to making his invaluable contribution as a player, Davidson also captained Hoyas' and X-Men Premier Division teams for a few seasons.

Now in the "Roaring Forties", at 5' 11" and over 200 lb, Guinea stays away from red meats such as pork and beef, but enjoys chicken and fish; for several years his main source of animal protein was fish. He also works out regularly on his exercise machine.

Reminiscing a bit, Guinea disclosed that on certain days in his younger days he would leave home around 6:15 in the morning and spend the entire day out playing basketball. From Pottersville… To Lindo Park at Goodwill… Then on to Windsor Park, before returning home after 6:00 p.m.

When asked whether while growing up he had idolized any player in the world of basketball, Guinea quickly responded, "Jodi, of course. Jodi," in reference to the legendary Michael Jordan of NBA's Chicago Bulls. He related that he would never miss a Bulls game and would even have games recorded on his behalf if he was not going to be available at game time. On the local scene, he used to admire the shooting style of Oliver "Neckers" Burton of Flames fame. Over the years, the teams that he enjoyed playing against the most were Cardinals, Knicks, and currently Blazers.

As a shooting guard, Toulon's favourite shot is the short jumper from the free-throw line extended, near the 'key', and he loves shooting 3-Pointers when he gets to take them. In several games Davidson would play the entire 40 minutes, and has top-scored for his teams on numerous occasions, even hitting at least 40 points on a couple of occasions, e.g. in 1999. He notes that in one fun Free-Throw shoot-out at Pottersville, he hit 51 consecutive Free-Throws.

Toulon received the Most Promising Player Award some time in the 1990s, and in 2013 he was the recipient of a DABA award for being the Longest-Serving National Player (from 1992).

Apart from playing basketball for his club and country, Guinea also represented his home-town Pottersville in football. He first played on Potters Intermediate, and then centre-defence with, and captained, the Potters Premier Division team in the late 1990s into the early 2000s.

Davidson, who has played basketball from the 1980s to current, commented on the sport 'then and now'. He notes that in the '90s players had a greater love for the game, "but today players don't want to train; they simply want to put on a jersey and come and play," he lamented.

Guinea's basketball journey continues and, barring the unforeseen, we can look forward to see him on the court again in the 2017 national league.