Jump Ball No. XXXVII (Part I) By Arlington James 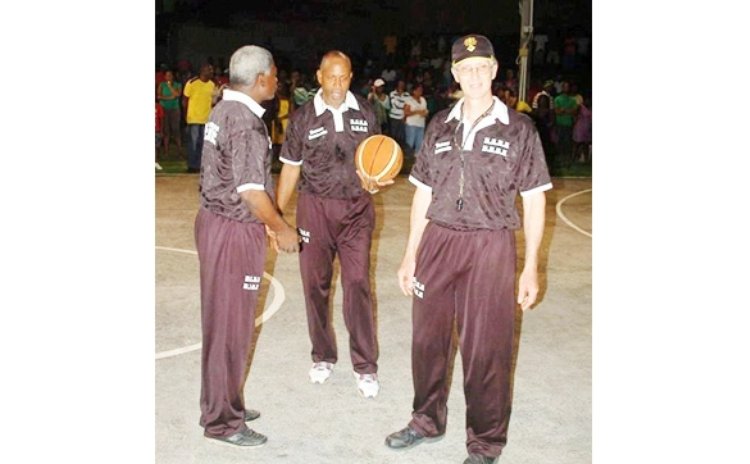 The Jump Ball columnist was once asked by a non-basketball colleague, "Why is this column called JUMP BALL?"

Simply, basketballers and basketball enthusiasts alike know that a basketball game must begin with a jump ball. And a referee administers that opening "jumper".

Three teams must participate in every official basketball game. These comprise the two competing teams and the "third team" (of officials). The referees must be assisted by table officials, and often by statisticians.

The Dominica Amateur Basketball Association (DABA) is a member of FIBA – the International Basketball Federation. Under current FIBA Laws, a basketball game may be officiated by either two or three referees.

However, only a few years ago, all games were officiated by two referees who were referred to as the "lead official" and the "trail official". This nomenclature depended upon the direction of the play at the particular point in time, and the positioning of the particular referee.

Basketball officiating in Dominica got a shot in the arm in 1987 when, under the auspices of the DABA, Art Phigpen, a well-respected basketball official/trainer from the United States, visited Dominica and conducted a short training programme for local basketball referees.

This led to the formation in 1989 of the Dominica Basketball Officials Association (DBOA) which, among other things, designed and adopted its own logo. That insignia appeared on its uniform shirts, letterhead, and ID Cards.

Subsequently, in 1998 under the auspices of the Dominica Olympic Committee, Fred Hogan (CABO) conducted a training session with referees.

Because DBOA's membership was small, the Association was administered by a three-man Executive comprising a President, Vice-President and a Secretary-Treasurer. Michael "Mike" Jones (deceased) was confirmed as the Association's first President, and others who held that office subsequently were Augustus Harris, Vincent Riviere and Al Monelle. Arlington James served as DBOA's Secretary-Treasurer from 1989 through 1998.

Furthermore, following Phigpen's visit referees in local basketball matches at the national level were the first on-court officials on Dominica to use the pea-less Fox 40 whistles. These plastic whistles replaced their metal "counterparts" (with the "seed") and are now standard in many sports the world over.

During its existence, DBOA held its Annual General Meetings, at which Minutes of the previous AGM, the Annual Report for the previous year, and the proposed work plan and budget were presented to the membership. On one occasion, a member of the media was permitted to attend DBOA's AGM, at which an award for the Most Promising Official for the 1996 basketball season was presented, to Ayoub Morancie.

Basketball officiating here is performed mostly on a voluntary basis. DBOA's main source of funding, however, was the Dominica Amateur Basketball Association, which collected – on behalf of DBOA - an "officiating fee" from each team which had registered to play in the national league.

Other sources of funding came from the Association's Individual and Affiliate members' annual subscriptions. Funds were also raised from especially requested contributions from members (e.g. contributing to the cost of purchase of uniform shirts, FIBA Rules & Mechanics hand-books, and for defraying the costs of the Easy Socials.)

In a sense, DBOA made history when it became the first non-Canadian grouping of basketball officials to gain affiliation to CABO. "Old-school" referees from the 1990s will surely remember regularly receiving Post Play – CABO's quarterly newsletter.

Officiating Engagements: Most of the officiating done by DBOA members was in DABA's Ball-o-Rama, National League, Play-Offs and Knock-Out competitions.