DBS News Editor Curtis Matthew is: The Sun's 2018 Person of the Year 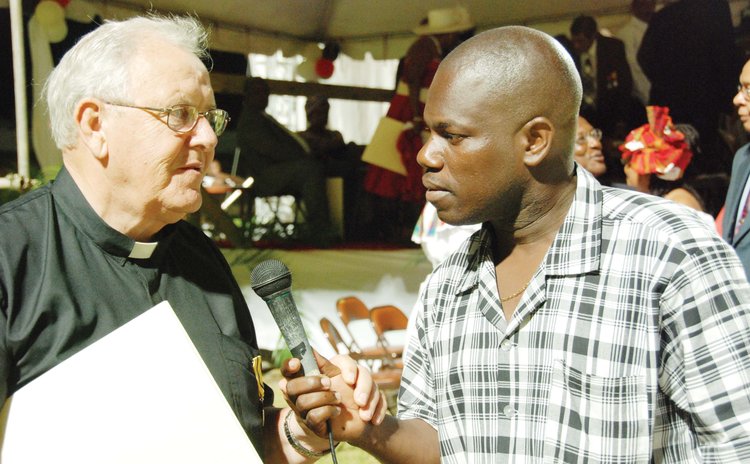 Size matters but it's not just size, it's quality.

That's the message of a popular promo voiced by former manager Dennis Joseph about the reach of DBS radio, the Nation's Station. That would also apply as well to the physical stature of Curtis Matthew, the DBS's news editor.

Matthew has worked at DBS radio for 32 years; he started in 1987 when he was young and energetic but today Matthew exudes the same enthusiasm in news gathering and disseminating. DBS radio produces three newscasts of about 20 minutes each every weekday and Mathew's hands are on every item. In news gathering he is relentless, as persistent as waves.

"I like going out for the news," he said. "I always felt that a lot of people will not talk to you on the phone but when you get to them, it's a different story."

And Matthew practically lives at the DBS studios on Vitoria Street in Roseau.

"My average day begins at eight, when I have to read the news it begins at 5.30 am," he said. "On an average day, I will leave DBS at midnight."

Frequently criticized for having a pro-government slant in the news and programme department, DBS radio is no different than other media outlets controlled by Government. But Matthew says he believes everyone should have a voice on DBS.

"I see the opposition as part of the development process in Dominica but because DBS is State-owned… you feel restricted in what you can do," he said. "I get a lot of pressure out there but I understand what the people are trying to say…it's not always true, it's not always true."

As an example of his attempts to include opposition voices in the news, Matthew said during the 2014 general election campaign he covered several rallies of the United Workers Party.

"Last election campaign I covered, on my own, I covered 11 campaign rallies of the United Workers Party," he said including the launching of the UWP manifesto.

When Hurricane Maria devastated Dominica on September 18, 2017 Matthew was the acting manager at DBS and he and his staff kept Dominicans here and abroad connected with their families. As the recovery effort continued Matthew said DBS news has not relented with coverage of every possible donation to the Dominican people.

As the Sun says in its editorial, Time Magazine has selected "The Guardians" as its Person of the Year. Following the magazine's example, the Sun has named Curtis Matthew as its Person of the Year to garner greater focus on the value of traditional media, such as radio and newspapers, where reporters are focused professionalism and accuracy, in the age of social media and widespread, worldwide attack on truth and the labelling of the traditional press as fake news led by US President Donald Trump.

It is therefore clear that Dominica needs to protect and encourage its fledging press because without the press democracy is dead.

"This passing of valued information is a wholesome essential of self-government. We can't reason together if we don't know what we're talking about," said Time Magazine in its Person of the Year feature.

For these reasons the Sun has selected news editor Curtis Matthew as its 2018 Person-of- the-Year.

For more, read Matthew's story on page four of this issue of the Sun.