De Days of "Brakes Again" are gone: the ace calypsonian is now a priest 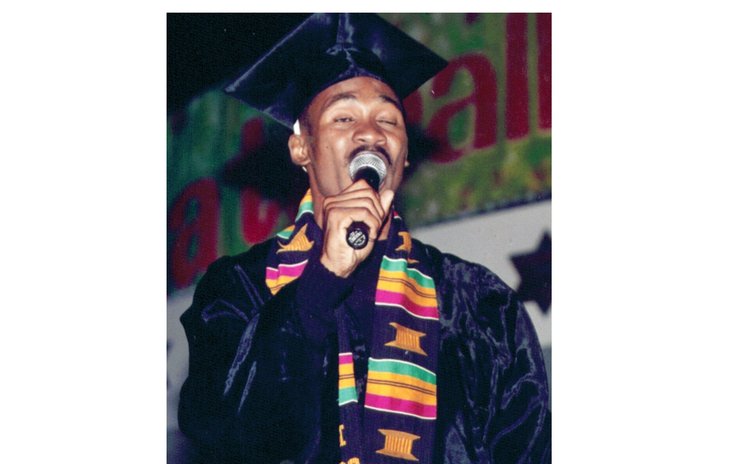 It is an overcast morning.

Father Brancker John gently stirs his tea in a conclave above the din of Roseau and gives insights into a particular aspect of his life.

No, the conversation is not about priesthood; this stroll along memory lane is a musical one.

It takes him back when he was caught up with the fun and splendour of Calypso — a time when he was a two-time Calypso Monarch in the late 1990s and the 2000 Road March winner.

As he was growing up, he says, his involvement in calypso was mainly as a listener. Nevertheless, he has vivid memories of the calypso finals he attended at age 16.

"Just going to the park, the size of the stage, the lights, the colour, the outfits of the calypsonians, the props, the skits that accompanied all of that…I had never seen that before," Father John said.

Before venturing into calypso, his singing experience was limited to the quiet village of Colihaut. There, he and a few friends would strum a guitar and sing by the roadside, for the sheer fun of it.

A calypsonian from the village was impressed by young Brancker's roadside singing and encouraged him to give the national Calypso competition a shot.

Brancker declined, but finally gave in. So it was that, at the age of 21, he took to the stage as 'Brakes' at Sisserou Hotel to perform at the elimination rounds of the competition.

It was a nerve wracking experience, but Brakes made it to the finals and he was ecstatic. "I jumped and jumped and jumped…it was like I had won the crown, I didn't care about anything else after that."

But when the finals rolled around, the novice calypsonian encountered a challenge he did not anticipate and it did not go well. The stage was nothing like the stage used for the shows prior to the finals and Brakes was not prepared for the intense lighting.

"The stage lights were right in front of me and they were blasting…" he recalls. "I sang my song, but I sang my song literally like a deer frozen in headlights.

"I never moved, I just stood there and sang because I couldn't see and I didn't know where to go," he says.

But Brakes overcame this problem in the following years as he learnt how more experienced calypsonians used the stage and dealt with the lights.

Brancker John has mostly fond memories of his Calypso years.

"I remember the first time I heard my song being practiced and played at the band house at the time…I didn't have access to recording studios, I would come with my song and go to the band house and hum and the ...parts were written…" he says.

And he recalls how wonderful it felt when he heard the band play his song for the first time. "That I think was a transformative moment. Up until that that time the song was in my head, I knew the song but other people didn't know it.

"But to hear other people pick it up and play it the way I am hearing it in my head; that was something else. That was a very moving moment…I was in awe, I was like 'Ohhh! That's my song'!"

To him, simply being in the band house and performing with the Calypso greats he had only heard on the radio, was special.

"I just felt like this little kid in the company of all these great guys…," he said.

Undaunted by his experience on stage at the finals on his first try, Brakes made a return the following year with "Make a Change." This time, he was third runner-up, behind Hurricane and Scrunter.

In 1997, Brakes won the crown from the defending Monarch with the songs 'Remember me de Malawi' and 'My Plan; Something to Believe in'. In 1998 he lost to Hunter, but he returned in 1999 to win the crown again, this time with 'Keep the Candles Burning' and 'Put the Brakes on Dem'.

His song 'Workers' won the Road March prize in 2000 and became the campaign song for the United Workers Party.

Today, while all of Father John's energies are channeled into his priestly vocation, yet he still enjoys a good Calypso and does a little editing for calypsonians who request his input.

Though the days of "Brakes again" — his signature stage cry — are gone, he briefly turned back the clock this year to perform some of his hits for visiting and local clergy members.

Does he miss Calypso? No.

But he knows he still has fans who dearly want him to return to the stage, especially for a matchup with reigning king 'Dice'.