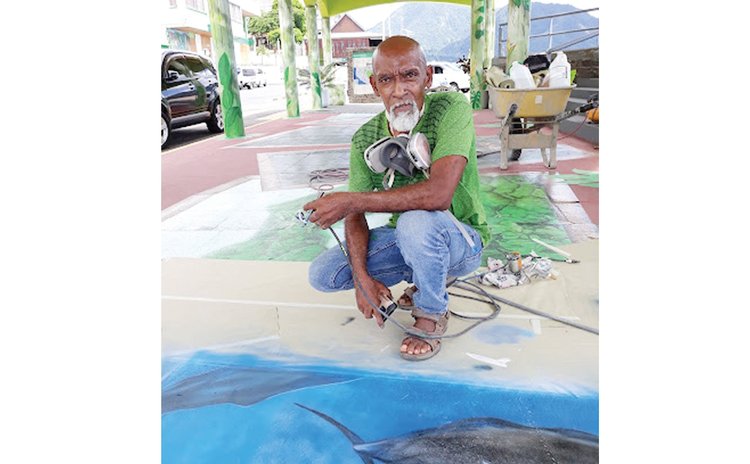 Dave Alie casually referred to as 'De Trini' or 'Alie' has made Dominica his home for the past 17 years.

This born-and-bred Trinidadian, who has traveled the world over due to his artistic skills, listed "quietness, peace of mind, and therapy," as the top reasons for making the Nature Island his home.

"I was on my way to Europe and I was invited by the PM to Dominica," he recounted. "I came and I saw the place and I fell in love with it and I stayed."

For the past 17 years, Alie has kept himself busy with airbrush painting, spraying homes and buildings. He also customizes boats, motorbikes, coffins, cars and the list goes on.

Dave Alie is an artist who knows his worth and is determined to give back to society, especially the youth.

"I think one of my turning points, wanting to stay in Dominica was to see if I could help the youth pursue a career in arts," he said.

But this path was met with obstacles along the way.

"Actually I taught for the Youth Skills Division at Grand Bay one time, Erika interrupted that... I thought about opening an art gallery/school whereby I can teach. The corona interrupt all of that," Trini added in his still-present Trinidadian accent.

His passion for fine arts constantly drives him to pass on the skill to Dominican youth but he laments the limited exposure to arts in the school system makes it difficult for young people to become involved in this field.

"At times I used to be a bit disappointed that not much (sic) people are interested in that. It's a task ahead of me. Because not much of it was offered in school they see it but have no idea of it so it's something for me to look into," he said.

Alie's work is known worldwide as he is an in-demand artisan; however, the travel restrictions have halted his attending of art displays in other countries.

"I did couple shows in Europe; Winnie Mandela, she's deceased now, she hosted an exhibition for me. I did some shows in the U.S. I did a painting for Obama. If I stayed in the US I'd be filthy rich," he said.

With such an illustrious career to his name, it begs the question: why stay in Dominica?

At the time of this interview 'Trini' was working on a project titled: 'The Window to Dominica' on the Roseau Cruise Ship Berth so that when passengers disembark they will see vivid spray painted scenes on the floor depicting tourist attractions such as the Emerald Pool, whale watching, and the Indian River.

"If you were in Europe you would see art on the floor… it's kind of new to Dominica, some people say why on the floor, but I mean other places doing it so why can't we?" he chuckled.

The list of work for Dave 'Trini' Alie never seems to run short. While pleased to be in high demand, he remains committed to trying to embed a love for the arts in the youth.

"Presently if I had the opportunity to have maybe one hundred, two hundred students I would really appreciate it. In my past times in Trinidad, I had in one class like 150 students. At one time I had nearly 500 students," he said.