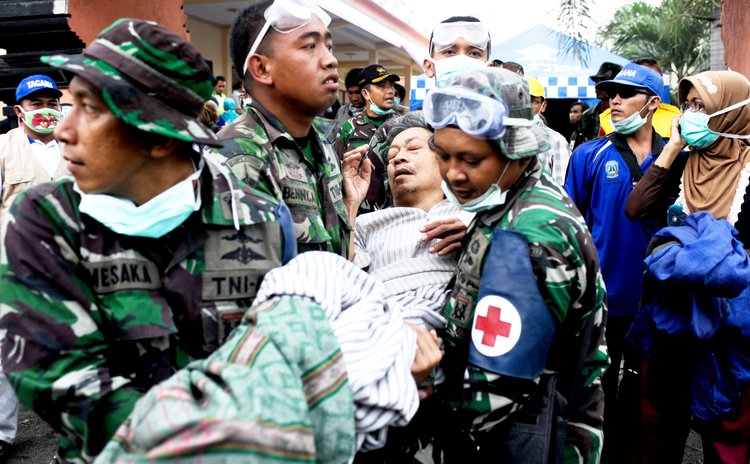 KEDIRI, Indonesia, Feb. 15 (Xinhua/ Sun) -- The death toll from eruption of Kelud volcano in Indonesia's province of East Java increased to four on Saturday with all of them living within the radius of 7 kilometers from the crater of the volcano.

National Disaster Mitigation Agency (BNPB) spokesperson Sutopo Purwo Nugroho said that 3 of those killed were choked by thick volcanic ash that blanketed their villages. Another victim was killed after collapsed wall hit him while he was waiting for evacuation.

"All of those victims stayed in Ngantang subdistrict in Malang regency. The volcanic ash covered the area as thick as 20 cm. The subdistrict was one of the most severely affected by the Kelud volcano eruption. Besides thick volcanic ash, the subdistrict was also hit by volcanic rocks from eruption with diameter ranging from 5 to 8 cm," Sutopo told Xinhua by phone.

Sutopo added that the authorities set up a total of 89 shelters accomodating 56,089 evacuees in 5 regencies around the volcano.

According to Sutopo, volcanic activities have eased since the volcano erupted late Thursday night, but minor tremors were still felt in several regencies. The top alert level was still imposed by the authorities with order to vacate areas within the radius of 10 kilometers from the crater having been issued.

Meanwhile, in Kediri, municipal police chief Dhenny Dariadi led the efforts to persuade people in the city to go to shelters provided by the authorities to ensure their safety.

"The persuasion efforts were jointly conducted by police and municipal officials as some locals living in the city returned to their houses from shelters without consent of officials in charge," he said.

White billowing smoke was still seen as high as 3,000 meters atop of Kelud volcano on Saturday with winds blowing southwestward. BNPB Chairman Syamsul Maarif said earlier that 2,500 police and troops have been engaged in restoring condition in affected areas, distributing masks to reduce risk of respiratory diseases due to volcanic ashes.

In Kediri volcanic ashes were still covering the streets and houses and reduced the maximum visibility to 1 kilometer.

Due to impacts of the eruption, Indonesia has closed 7 airports on Java island until further notice.