Deborah Harris: I fell in love with Dominica right from the start 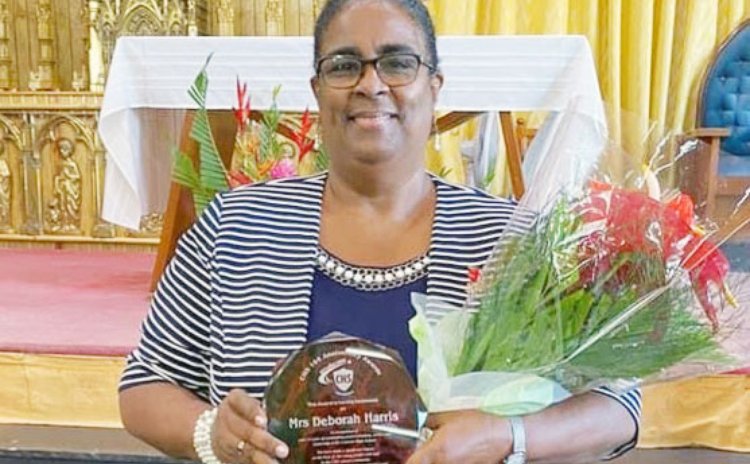 Mrs. Deborah Harris of Barbados, first came to Dominica in 1974 having fallen in love with a son of the soil and then with the country, which she calls home.

She tells The Sun, that Dominica's topography was the first thing that caught her eye.

"Flying into the then Melville Hall Airport was the verdant green mountains and acres of coconut trees. Coming from a flat island, the mountains were impressive," she said.

Mrs. Harris' most significant contribution to the country is in its education sector, becoming a teacher at the Convent High School (CHS)– her 'home away from home' – in September 1975.

"I started as a foreign language teacher, teaching French and Spanish," Deborah said. "The following year I was teaching only Spanish. In 1979 we left Dominica for a bit. I rejoined the CHS Staff in 1981 and was asked to teach Caribbean History. That began a long stint as a History teacher."

Mrs. Harris spent intermittent periods away from Dominica but always returned to the CHS where she helped nurture young ladies into wholesome, productive women. She sagely stated: "At all times, I have given of my best as I understood the impact that teachers can have on their students."

Deborah describes herself as a proud West Indian woman and a strong regionalist because the English-speaking Caribbean feels like 'home'.

"I am aware of our common origin and history, so I consider us to be one people," she said. "Individuals usually have difficulty telling where I am from through my accent, so when they finally ask, I usually laugh and say that I am a 'Bajan-Dominican-West Indian'."

Not calling it a culture shock per se, Harris says there was one main adjustment in moving to Dominica.

"I would say the biggest difference was the Dominican accent and the Kwéyòl language. It took a little while for my ear to pick up the speed and rhythm of the Dominican accent," she said. "As far as Kwéyòl was concerned, because I had studied French, I could understand certain Kwéyòl words, and over time, I understood more."

In her over 40 years on the island, Mrs. Harris' impression of Dominica has only transformed for the better.

"I fell in love with Dominica right from the start and that hasn't changed. Over the years, Dominicans, of whom I consider myself to be one, have just reconfirmed my initial assessment of them as a strong, resilient, nationalistic people," Deborah said.

A span of four decades brings about a noticeable change in any society. Mrs. Harris has witnessed many events in Dominica's history.

"Dominica went through some turbulent years, especially in the latter half of the 1970s, - riots, strikes, changes in government, the 'Dread' issue - but there has been a lot of growth as well. Over the years, the Independence celebrations have only grown in size and importance," Deborah said.

Mrs. Harris who was also Vice Principal at CHS touched on growth in the education sector.

"In 1974, there might have been four secondary schools, all in Roseau. Over the years, that number has grown to 15, all over the country. There are also tertiary level institutions and teacher training programmes," she said.

She pointed to other areas of progress namely: road infrastructure, technological advancements, tourism, housing, telecommunications, and the maintenance of Dominica's Nature Island status.

"Now, does this mean there are no problems in Dominica, or there is no room for improvement? Obviously not. But there has been a lot of development and we should be proud of this," she said.

A keen observer of global events Mrs. Harris opined: "I hope we don't take the peace and stability that we enjoy here in the region for granted. As the saying goes, 'you never miss the water till the well runs dry' and once a society descends into chaos, it is very difficult to get it back on track."