Tourist arrivals plunge by 69% between January and August 2020 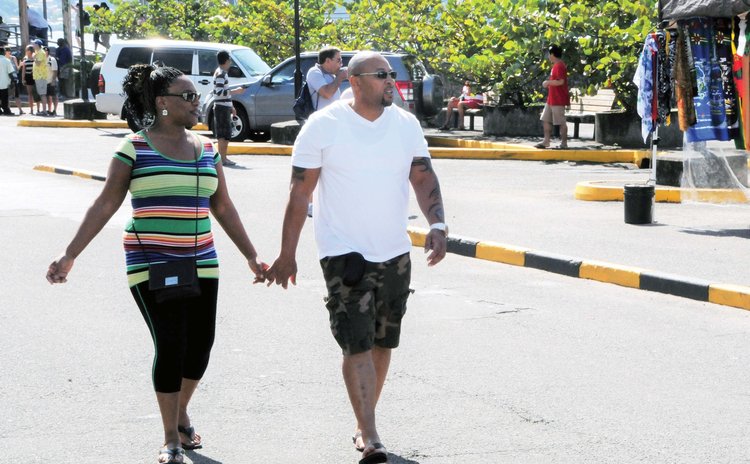 The true impact of COVID-19 on tourist arrivals to Dominica has come to light, with figures from the Barbados-based Caribbean Tourism Organization (CTO) confirming a calamitous fall.

According to the CTO numbers released last week, tourist arrivals between January and August this year fell by an astounding 69.1 per cent, with only 18,849 tourists visiting the island during this period. The fall during the winter season, though poor – there was a 41.4 per cent decline – was nowhere as bad as the summer months when arrivals fell by a precipitous 98 per cent.

There have been obvious signs that the pandemic has been biting off large chunks of the sector – the airport closures, the thousands of job losses, the cancellation of events, all directly related to the coronavirus outbreak. However, up until now, the seismic impact on arrivals had not been stated so emphatically.

According to the CTO data, there was a 4.5 per cent decline in January, when 5,762 long-stay tourists visited these shores. With carnival taking place in February, the numbers improved significantly - the 9,611 visitors representing a 25.2 per cent increase. But in March, as countries around the world began to impose travel restrictions and airlines began grounding flights, overnight visits to Dominica fell by 70.3 per cent to 2,898 tourists, despite Prime Minister Roosevelt Skerrit's resistance to closing the borders.

The country reported its first COVID-19 case on 22 March, and four days later Skerrit announced closure of the airport and seaports to international travel. This led to 100 per cent declines in April and May, and a 99.9 fall in June, with the country welcoming a single visitor that month. Although the ports remained closed in July, the country recorded 84 tourists that month, representing a 99 per cent decrease when compared to July 2019, and with the airport reopening on 7 August, tourist arrivals jumped to 493, a 94.2 per cent slide compared to August of last year.

While the airport has reopened, the cruise port remains closed, mainly because the US Centre for Disease Control and Prevention has imposed a 'no sail' order on the cruise lines, at least until the end of this month. The cruise industry, meantime, has gone even further, voluntarily suspending voyages in U.S. waters until 31 October at the earliest.

But both the cruise industry and Skerrit are eager for the return of cruising, with the prime minister revealing during one of his recent radio programmes that he was in talks with the lines on the matter. Although income from cruising is miniscule compared to long-stay tourists – the cruise industry was responsible for just 8.1 per cent of all visitor spend in the Caribbean last year, according to the CTO - the prime minister argues that Dominica needs the money that the cruise lines are expected to generate.

"Obviously, as we always said, the safety and health of our people is paramount, but at the same time we have to pay our bills," he told listeners to his weekly Anou Palay programme.

Skerrit also said the Trinidad-based Caribbean Public Health Agency (CARPHA) had made recommendations to the CARICOM heads of government on protocols to guide the resumption of cruising and that his government would review these recommendations.

Two of the main recommendations are a regional strategic approach to the resumption cruising and the establishment of a Caribbean cruise operating committee, according to the CARPHA document, a copy of which was obtained by The Sun. Among the recommended tasks for the operating committee are the development of "clear health and safety protocols" in health and wellness, safety and security, sustainability and transportation, and a Caribbean cruise bubble "for a more immersive and streamline[d] cruise experience".

There are also recommendations for the development of an app and a web-based platform for "real time communication with regional partners on health and safety related matters" and agreed uniform testing protocols.

"As oppose[d] to using distinct testing protocols, ALL Caribbean destinations should agree to identify the gold standard and adopt for testing," CARPHA recommends. "Protocols should be established along the entire spectrum of the cruise process/experience; reviewed and agreed by all Caribbean destinations."

During a Facebook Live discussion organised by the CTO last week, Dr. Lisa Indar, the assistant director of surveillance, disease prevention and control at CARPHA suggested that the region must ensure cruising is safe before allowing the cruise lines back in.

"Making sure the testing is done, making sure that on a cruise you're able to social distance and wear masks because now you have a larger number of persons in a smaller quarter that is travelling on a big ship for a long period…and then that ships goes to many destinations; what type of testing [is done] before you disembark and when you get to the country, what type of testing is there," she told the discussion dubbed, Forward Looking.

The resumption of air travel has resulted in large spikes in COVID-19 infections in Caribbean destinations such as the Bahamas, Jamaica and the Turks and Caicos Islands, leading the UK to impose 14-day quarantine restrictions on people arriving from these countries.

And while he remains unconvinced that the spikes are an indication that the region is losing the battle against the virus, Dr. James Hospedales, the former head of CARPHA, said COVID-19 will test the Caribbean's resolve for a long time.

"A country can start early and close borders and test and trace and isolate, and be 'winning the battle', but once you begin to open up, the virus is there, waiting to come back in," Hospedales was quoted in the Sunday Gleaner as saying. "The question is not only about how governments respond, it is also about how the community and business respond. It will be a test of discipline and ability to change and sustain behaviour change in our entire populations. As the epidemic transitions to more generalised spread, there will be other shocks and tests to our systems."