Demands of Employees of the State Prison Met Within Hours 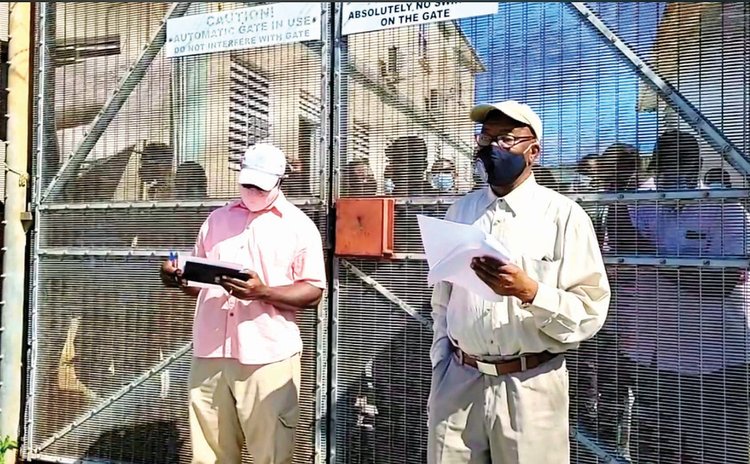 "Pressure does burst pipes," a saying which the Government of Dominica has proven to be true yet again following its swift response to industrial action.

On the morning of September 28, 2021, employees of the Dominica State Prison abandoned their duties and gathered on the compound of Dominica's lone penal institution to bring to the attention of the government their "poor and dangerous" working conditions.

Following three hours of protest action by the employees with the support of their union, the Dominica Public Service Union (DPSA) government officials were on the scene and agreed to a meeting the same day.

Letang said in their attempt to avert the need of protest two letters were sent on September 14, 2020, and February 5, 2021, respectively. Both letters highlighted the level of disappointment and anger that existed among staff at the prison, "over lack of interest being shown at the highest level with regard to their concern."

"We never got a response," Letang said.

Among concerns of the prison employees were the non-appointment of acting and temporary staff, the stoppage of certain medical benefits to prison officers, issues with the requisition of food supplies, the lack of suitable quarters for both male and female staff which, at present, are not separated, and lack of adequate staffing.

With regard to the pandemic, 210 inmates have tested positive with Covid-19 but due to security reasons they are unable to be moved to the government quarantine facility and kept among other inmates and staff with no medical care.

The DPSU boss also complained of staffing at the facility.

"The prison is understaffed. They have an approved complement of staff of 72 and right now it is 58 and that includes auxiliary staff who, by the way, carry out all the duties of prison officers and have been in that non-established position for as long as 10 years. This has a lot of implications for them in terms of their gratuity, their vacation leave, their pay, and everything," Letang said.

Letang revealed an earlier planned protest action was halted as the Minister of National Security and the PS were informed and held a meeting with the employees in what he labeled as an attempt to intimidate staff but more issues had since surfaced.

Upon arrival at work on the day of protest, inmates were fed but no other service was rendered by the officers. He vowed that protest actions will continue until all their issues are addressed

Following the meeting with over 40 employees, Letang revealed to The Sun that a committee was established and deadlines given for all concerns to be addressed.

"Where it pertained to appointments, we were given the assurance that all recommendations will be submitted for appointments for the Public Service Commission meeting on the 21st of October. With regard to transportation where only one transport is being used by inmates and employees, we were told that before the end of the week a quotation will be given for the purchase of a new vehicle," Letang said.

With regards to the Covid-19 outbreak at the prison, an assurance was given that the Ministry of Health will provide training to staff.

"We have also put a structure in place so that all the things we have agreed to will be implemented," Letang said.

Only a month ago, Kenrick Jean-Jacques was officially appointed Superintendent of Prisons after acting in that post for over five years while Jeffery Edmunds was also appointed to the post of Chief Prison Officer (CPO).