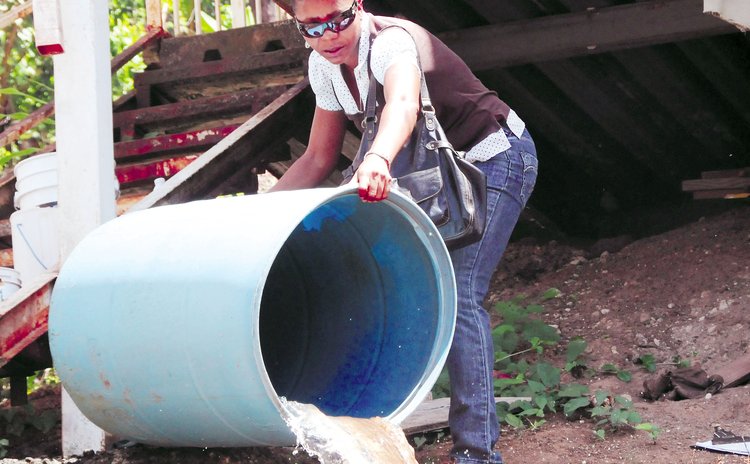 Health officials in Dominica are now reporting "a decrease in the number of dengue cases reported on a weekly basis". According to a release from the ministry of health "there were a total of 17 cases for the period August 25 to 31, as compared to 23 cases in previous week. "The highest number of cases occurred during the week of August 4 to 10, with 28 probable cases and one confirmed case.

"Twenty persons have been hospitalized, to date mainly children and young adults...though cases were reported from all seven Health Districts with the Roseau Health District reporting the highest number of confirmed cases. To date there have been no reported severe cases of the disease or deaths from Dengue Fever," the release states. Speaking to the SUN, staff of the Environmental Unit reported that they were working "hand in hand" with the National Pest department and locals on the ground to eradicate and control the pest.

"The Ministry of Health in collaboration with the National Pest and Termite Control continues its control and prevention programme, in managing the outbreak of dengue fever by fogging, (using non-toxic chemicals to destroy the adult mosquito), conducting households inspections, treatment of all ports of entry, treatment of major dump sites and swamps , holding of educational sessions in the various health districts ,distribution of educational materials and media campaign."

Dengue is caused by any of four dengue viruses, which are transmitted by Aedes aegypti mosquitoes. Dengue is a major public health problem in the Caribbean, Latin America and Asia. Symptoms of dengue include high fever, severe headache, severe pain behind the eyes, joint pain, muscle and bone pain and rash. Severe infections can result in hemorrhage, shock, and death.