Derek Walcott: We're not there yet 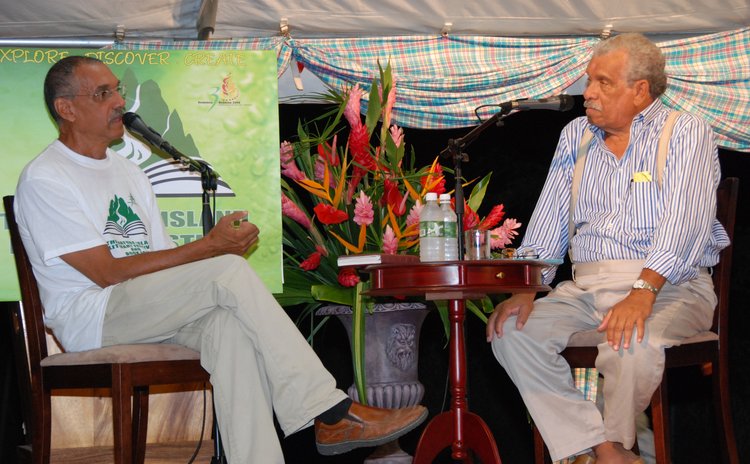 Alwin Bully interviews Derek Walcott at the NILF&BF in 2008

Derek Walcott, Nobel Laureate, has been critical of the quality of poetry and prose produced in Dominica and the Eastern Caribbean. Walcott, who won the Nobel Prize for Literature in 1992, spoke here during a presentation at the just concluded Nature Island Literary Festival and Book Fair organised by the 2008 Reunion Committee.

"I'm telling you what I'm hearing in terms of young West Indian poetry is seriously deficient in terms of symmetry, sense, vocabulary, syntax, whatever," Walcott said. "The reality of it is that there is less craftsmanship present in the young now than there was in another generation. Now you can say 'what kind of craftsmanship, what do you mean? Having a poem rhyme?' Maybe. 'Having a poem having a particular shape?' But these are shapeless things.

"What we have now is extremely thin. Is this because it's political which means it has its own conceit. It's a kind of propaganda and it's very racial pointlessly. It's no point going around telling everybody you're black when they can see that."

Walcott, a St. Lucian, has published more than 20 plays and has been widely staged all over the world. Many of his plays deal with the West Indies in the post colonial period.

Interviewed before an audience at the festival, by Alwin Bully, Walcott said he fears that his native St. Lucia has been 'ravaged by tourism' especially by extremely large hotels.

"I think it's dangerous in a sense that it affects scale, proportion, human proportion is seriously affected if it is not controlled," Walcott said. "That's the thing the people of the Caribbean have to look out for. The ownership of the Caribbean may have been transferred again to the new empire which is the States".

Walcott said "free movement" in the context of the Caribbean Single Market and Economy (CSME) is "absurd" because of the needless hassle that Caribbean people still have to endure while travelling around the Caribbean.

"It has to do with, to some people that absurd concept which is this all be one unit, it should be a federation of islands. But of course people are not going to do that because to do that some guy is no longer minister of finance in St. Kitts, you know what I mean".

Walcott said he does not believe in CARIFESTA, the Caribbean Festival of Arts, because it does not serve any useful purpose.

"I'm going to say it when I'm there, because the money that is spent on CARIFESTA is another kind of absurdity, "Walcott said. "It pretends to bring the artistes together but what artistes? When they come back home they are just as broke and they have no direction".

Asked how he would advise young writers to improve their output, Walcott said people do not necessarily have to respect writers of his generation but they will have to admire the dedication that these writers had and "that should be envied and copied by the younger writers".

Walcott was the main overseas performer at the three-day event held at the University of the West Indies Open Campus and was organised by the 2008 Reunion Committee. Comedian Paul Keens Douglas of Trinidad, Mervin Morris of Jamaica and Robert Lee of St. Lucia were among the overseas poets who performed at the festival and book fair. Many Dominican poets and writers also performed at the event.