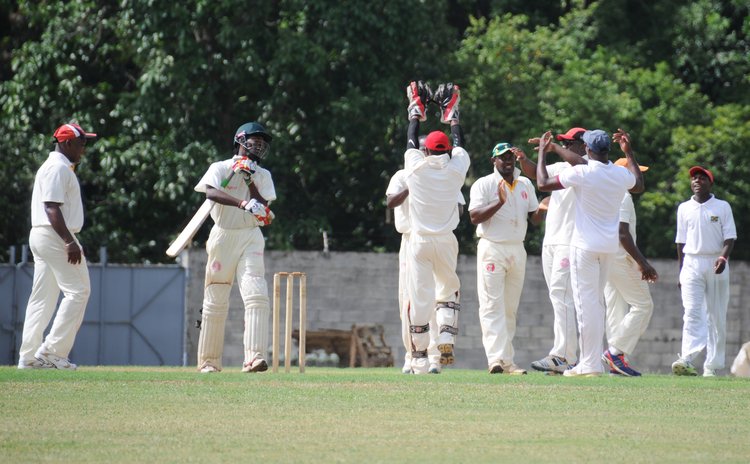 Tremors takes a wicket in the first Dublanc innings on Saturday

Roseau, Dominica (August 22, 2016): A combination of patience and perseverance put the Desiderata Tremors Sports Club in the top spot of the 2016 Digicel Augustus Gregoire Premier League. They came up against Dublanc United Sports Club in the finals on Saturday, August 20th and Sunday, August 21st, 2016 at the Windsor Park Sports Stadium.

Dublanc United responded with 160 to Desiderata Tremors' 178 in the first innings, and were left to chase 115 runs after Tremors scored 96 in the second innings. With Dublanc on 6 for 2, it seemed that it was going to be a short day but the pair of Odiamar Honore and Liam Sebastien hung in and got the score up to 53-2.

At 81-5, it appeared to be a sure win for Dublanc United with Team Captain Shane Shillingford at the crease, having scored eight 6's in the match so far; but it was not to be. The last five wickets fell under an hour and by 4:59 p.m. it was all over and time for Tremors to celebrate.

"Dublanc is a tough opponent and to see that they didn't get to 115 means that was very good bowling from my team," he said. "I just want to tell the guys to keep working hard so that we can come back next year and defend the championship. Dublanc used their spinners on this wicket so we went in to bowl with the same plan and it worked for us at the end of the day."