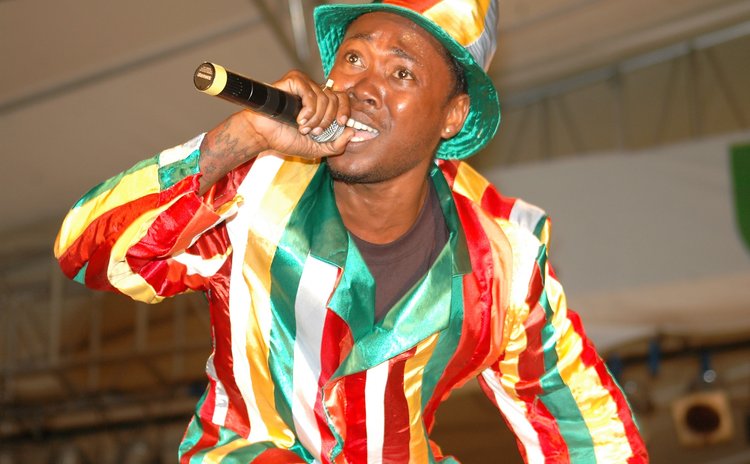 This is the former Calypso King 'Dice' in a nutshell.

A veritable livewire on stage, Dennison 'Dice' Joseph exploded unto the Calypso scene with his unmistakable voice more than a decade ago.

Since then, he has won the national Calypso Monarch crown a jaw-dropping eight times and the Road March crown five times.

He and his songwriter Pat Aaron have formed a powerful partnership, impacting the local Calypso culture in a way never seen before in Dominica.

It's the stuff music legends are made of.

Dice remembers selling sunglasses on the roadside when Aaron approached him and offered to write a song for him to perform in a national Calypso competition.

A lifetime lover of Calypso and winner of the Junior Monarch while at high school, Dice had placed third in the national competition the year before with 'Tarzan in the Jungle' and 'Check your Politicians'.

He agreed and the huge hit songs Aaron penned for him in 2004  'Animal Farm' and 'Minding my Business'  catapulted Dice to his first Calypso King title.

It was the beginning of a dynamic partnership that has propelled Dice to the top of the ladder of local Calypso stardom.

Dice won again in 2005 with 'Puppet Master' and seized the crown a third time in succession with 'I ain't Afraid of Dem' in 2006.

Since then, it's been Dice again and again...and again!

"I think Jah gave me a great talent to sing and I love Dominica so when I sing about Dominica I think they see it in my face and in my expressions," he says.

But his mission is not to win competitions.

"I don't go into it for competition's sake. As long as I have something to contribute, that's my push, that's my drive…my drive is that as long as we [he and Pat Aaron] produce something for carnival and the people love it, for me, I win already…."

"The crowd and…my supporters and my fans, they want the crown itself, so I have to analyse my strategy. . . How am I going to stay focused and handle my business so that the people can get the crown they want? But for me, as long as you like the song, carnival good for me, eh!" he chuckles.

He adds dryly, "It's good to win too…you get paid!"

Dice said he didn't actually absorb the fact that he had won so many crowns until his seventh win.

"On [winning] the seventh crown I said to myself, 'What! I win seven times man!'" he says.

Dice considers Calypso a tremendous tool for social commentary and nation building, so his songs are generally poetically crafted to take an incisive look at the political environment.

"That is what the movers and shakers in society listen to more…Calypso. If you want to talk to them, I guess that's where you have to go. You can play a part in your society where music is concerned, not just to make the money, but to enlighten…." he insists."

He also uses Calypso to speak up for the poor and downtrodden.

But doing so can have adverse consequences, especially when persons he needs to turn to have different perspectives from those expressed in his songs.

"If I have to go to them to climb up my ladder, they carry their feelings and help to prevent too, sometimes…," he said.

Dice explains that while he is not saying that anyone is trying to keep him back, he would have been a little further along if people were more balanced in their thinking.

"But it doesn't change the fact that all that comes with the vibes… it's not a wrong thing I doing and I believe in what I doing and what I saying. Not nobody I hate, but nation building belongs to each and every individual to play his part," he says.

Dice thought for a little while when asked whether Calypso is his favourite genre. And surprisingly, the answer is no. He likes conscious Reggae a little more and would like to explore his talents in that genre.

Yet, Calypso has changed Dice.

It thrust him into the spotlight as Calypso king, making him conscious of the necessity to handle situations tactfully.

Calypso has also made him more patriotic, he says.

Dice believes that if Dominica, as a nation, needs to do more to help talented local artistes succeed so the local music industry can move further along the road to international acclaim.