Digging Up the Dead

As cemeteries run out of space, dead bodies are being dug up before they decompose 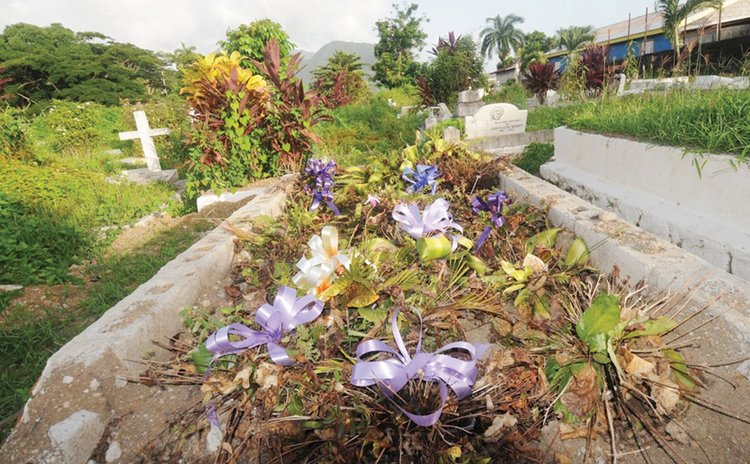 A newly dug grave at the Roseau Catholic cemetery

It's been almost three months since Laurette Anthony-Layne laid her deceased grand aunt/ adopted mother to rest. But since that time, the Dominican national who resides in the United Kingdom says that she's had nightmares about that day, and not for the reasons one would imagine.

"It was absolutely horrendous walking in the cemetery and seeing the skull, and bones of another deceased individual in the dirt used to bury my mother," the still traumatised woman told the Sun.

"It leaves me to wonder if her remains will get the opportunity to fully decompose before the gravesite assigned to her will be dug up in the next few months to make room for another individual," Mrs. Layne added.

As the global population continues to grow, space for putting the dead to rest is at a premium, with Dominica being no different.

In 2014 when the Sun investigated and reported on the condition of cemeteries, Anthony Scotland, then Chief Environmental Health Officer (CEHO) said there were major concerns over the "lack of burial space" in many cemeteries around Dominica, especially in Roseau, Pointe Michel, and Massacre.

"They were almost filled", he said.

Eight years later, a senior gravedigger who goes by the alias 'Cheddy' tells the Sun that the situation at these cemeteries has not changed, and has probably gotten worse. "We see that happening all the time. Those man haven't got no proper structure in place when it comes to choosing which hole we dig, so most times what happens is we dig a hole, and the person in there is not yet fully rotten. By how that looking, once a grave doh have fresh flowers on it seems like it safe to dig," he alleges.

The Samuel family, who recently spent in excess of 8000 dollars to give their grandfather a proper send-off, expressed similar concerns to the Sun.

"We paid nearly 1500 dollars just for the grave fee and digging of the hole, the least we were expecting out of respect for my family, is not not see an undecomposed bone at the graveyard," Clive Samuel stated.

The issue has not only posed a challenge to family members but also to religious leaders -including a prominent Catholic priest- who say that the lack of graveyard space is not only a church issue, but also a health one that the government should place more focus on.

The Catholic leader who spoke to the Sun on the usual condition of anonymity notes that Dominica's burial laws are "outdated and are in need of a serious revision." He is also hopeful that a survey which was conducted by then chief physical planner, Raphael Francis, on the status of all cemeteries on the island will soon be implemented.

During the past month, the Sun has made numerous attempts to speak to a representative from the Ministry of Environment on Dominica's burial laws and the status of the cemeteries on the island.

This includes attempting to speak to the CEHO, Ferdinia Carbon, who during a previous interview with The Sun's reporter indicated "we have to give the graves seven years before opening them (but) because of the lack of space people were digging graves they were not supposed to and that was causing a serious health issue".

She added: "One of the things that makes it even more difficult, is that we don't have in many cases organized cemeteries where you have numbers given to graves and you have names of the person buried with a date and this tells you where you can dig." The Sun was also promised that a copy of the cost to have a body cremated -an alternative to burial- would be sent via email, from one of the funeral homes on the island, but up to the time of press, this was not done.