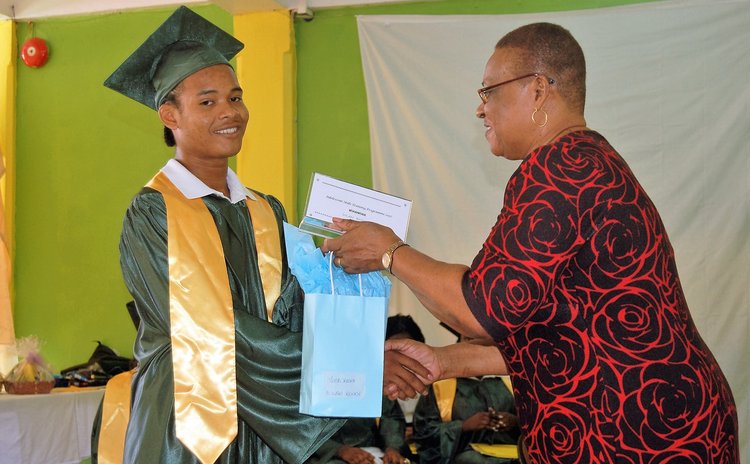 If ever there was someone dominating the prizes during this season of graduations for the end of the 2016-2017 schoolyear, one would be hard pressed to equal the achievement of Dilan Bonnie when the Social Centre bade farewell to 11 young men and women recently. Bonnie in that class of 2017 of the one-year Social Centre Adolescent Skills Training Programme (ASTP) and From Offending to Achieving (FOTA) under the theme Tomorrow is starting now; let the change start with me walked away with all but one of the subject prizes. Bonnie received the prizes for Woodwork, Information Communication Technology, Literacy, Numeracy, Spiritual Development and the Mrs Gail Rolle-Greenidge Student of the Year Award.

Ms Cheresa Esprit got the prize for Food Preparation and Cooking, while Ms Nelisha Small was the Most Improved Student of the Year.

Earlier, the graduates had some sound words of advice from Agency Manager of Sagicor General, Brenton Hilaire, as they embarked on a new chapter in their life. He agreed with the theme that "tomorrow starts now, and that my actions today will affect my future." He told them that they should not start acting tomorrow but to start now, and one of the first things that they should do is to set their goals up front.

Hilaire added that if change had to start with them they should bring about that change in themselves. He gave them some points to ponder as they worked towards their goals. They should make preparations; have clear thoughts; design the actions they would take; take small steps and not attempt more than they could manage; they should be different from the crowd especially in their discipline to the task ahead; to avoid making excuses; and to start, because if you don't start you don't have no right to complain about tomorrow.

Mrs Denise James who led the course in Spiritual Development presented the prizes and awards. One of the awards went to Home Industries for their unwavering support to the Social Centre.

Coordinator ASTP/FOTA, Ms Tyisha Williams Bellot gave the end of year report. Williams Bellot noted that for over 30 years the Social Centre had been helping young individuals to prepare for a productive future, and in recent years young people who had found themselves in conflict with the law through FOTA.

Twelve young people had begun the ASTP while 11 had participated in FOTA pursuing the subjects already mentioned. The students also had attachments with various business places and also participated in field trips for instance the Fire and Ambulance Service and snorkeling, and had guest speakers address them.

They were given counselling and social skills, and entrepreneurship course to deal with job scarcity. Indeed, it was quite a busy programme for the young people; and they even received a stipend to help with bus fares and other expenses from some funding agencies, thanks to the initiative of Social Centre Coordinator Norma Cyrille. The students also had second and third terms examinations. Mrs Williams Bellot, after six months as Coordinator ASTP, could report improvements in behaviour, conduct and academics.