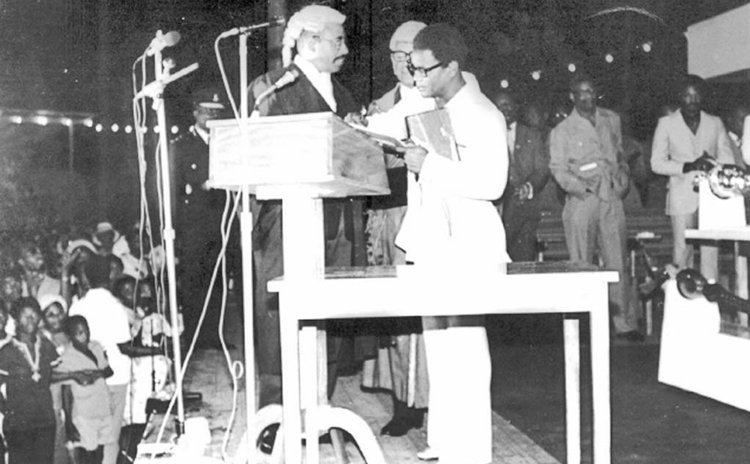 Dominica enters its 43rd year as an independent nation more divided than it has ever been since Britain severed its umbilical cord on 3rd November 1978.

And on 3rd November 2020, as we take stock of our progress or of our inordinately inadequate development, we must realise that we have been pulling ourselves down to where we are today, the poorest nation in the Eastern Caribbean, woefully dependent on our new monocrop -the sale of passports. A small divided nation like ours will find it difficult to survive in this ultra-competitive world especially if we are constantly at war with each other.

Undoubtedly, the major cause of this division is our tragic brand of divisive politics in which the winner actually takes all-the free government-funded houses; the meritorious service awards presented at the anniversary of independence; the business development concessions; the passport-selling agencies.

Of course the major cause of this division is the persistent divisive politics; reds and blues are constantly at each other's throats every day of every week of every month; the country seems to be in perpetual election campaign mode. No country can survive this incessant battering, this energy-sapping verbal warfare on radio talk shows in particular, this constant undermining of Dominica's good name in the international press due to our alignment with unsavory persons and groups. To save our country we must declare a truce, an end to this hemorrhaging of our country's image. Everyone should be able to survive on the 289 square mile volcanic rock that we call home.

But realistically, political warfare will not decline or end and Dominica will not enjoy any form of a developmental ethos unless the majority of inhabitants acknowledge that in truth and in fact this, and any other, Government was elected freely and fairly; that the electoral playing field is even and relatively free from the abuse of incumbency; that no party is spending as much as one hundred million dollars on an election campaign and other parties can only muster just a few hundred thousand; that the local and regional courts are perceived to be independent and unbiased, because, according to Montesquieu: "There is no greater tyranny than that which is perpetrated under the shield of the law and in the name of justice".

This year as in past years the Government of Dominica has decided that during the observance of the nation's 42nd year of political independence, we should celebrate our progress and development. By selecting that theme (Embracing New Opportunities) the Skerrit Administration is implying that Dominica has taken advantage of old opportunities has made exceptional progress economically and socially and therefore we should all join the independence fetes with gay abandon. But instead of gaiety, we are of the view that during this special occasion we must contemplate on the future of the island that O.N. Pond, the author of our National Anthem, has described as "this gem beyond compare."

Indeed, we have to embrace new opportunities but we cannot do so effectively unless we reduce the level of political divisiveness, unless the vast majority of Dominicans have their shoulders to the wheel of development, unless justice, according to Dr. Martin Luther King, "rolls down like water and righteousness like a mighty stream."

We have not read the speech that Prime Minister Roosevelt Skerrit is scheduled to deliver on November 3rd 2020, but we can assure you he will brag that the nation has, never in its history benefited from so many infrastructural projects over a period of five years. This is the tenor of the speech we will hear from the Prime Minister. And to make this particular prediction we claim no level of clairvoyance: he's been saying the same thing during his independence addresses for 15 years.

So, we anticipate that Prime Minister Skerrit is itching to boast about the construction of new roads, highways, bridges, houses, airports, water supply works and other projects, all over the country. He will, undoubtedly, emphasise to his viewers and listeners that his administration negotiated and signed more critical bilateral and multilateral development agreements than any other government in the past 41 years.

We will be reminded that these are manifestations of the fact that Dominica is making progress and is definitely on the road to development. But his critics will remind Mr. Skerrit that in spite of the country's seemingly embellished unprecedented socio-economic development we continue to experience the exodus of the country's best professional minds and skilled men and women. Why are they leaving this land of milk and honey?

So we hope in his speech on Independence Day 2020, the prime minister presents us facts, not delusions, on the state of the Dominican economy, especially during this COVID-19 pandemic.

Mr. Skerrit recently suggested that Dominica, for the first time in history, is enjoying the fruits of his labour- a billion-dollar economy.

"When the (Dominica Labour Party) took over in 2000 the Dominican economy was close to one billion dollars. It was $900.87 million," Dr. Fountain said on Q95 FM recently.

Dr. Fountain, a member of the opposition United Workers Party (UWP) said comparatively, from 2000 to 2019 the economies of countries of the Eastern Caribbean (St. Lucia, St. Vincent, Antigua and St. Kitts) doubled whereas Dominica's economy grew by just 50 percent-in 20 years.