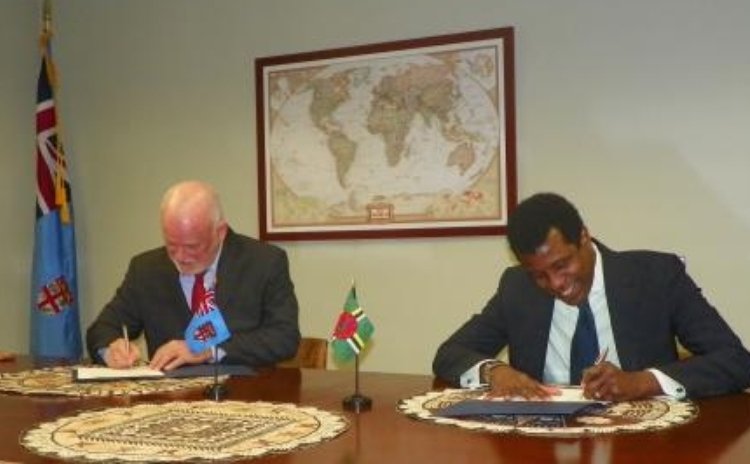 Dominica and the Republic of Fiji formalised diplomatic relations in a ceremony at the Fiji Mission to the United Nations in New York today, a report from the Permanent Mission of Fiji to the UN stated.

"At the ceremony, the Permanent Representative of Dominica to the United Nations, Ambassador Vince Henderson, and his Fijian counterpart, Ambassador Peter Thomson, signed a joint communiqué establishing diplomatic relations between the two nations.

"The communiqué expresses the desire of the Governments of Fiji and Dominica to promote and strengthen the bonds of friendship and cooperation between their two countries in political, economic, cultural, humanitarian and other fields. It also states that diplomatic relations between Dominica and Fiji will be guided by the principles and purposes of the United Nations Charter and international law, and that they are established in accordance with the provisions of the Vienna Convention on Diplomatic Relations.

"Following the formalisation ceremony, Ambassadors Henderson and Thomson held talks on areas of common interest between their two countries. Both countries are members of the developing countries groups as G77 (the Group of 77 and China) and AOSIS (Alliance of Small Island States). Ambassador Thomson reported on the steady progress being made towards Fiji's 2014 general elections. Ambassador Henderson briefed Ambassador Thomson on the work Dominica is spearheading to channel donor funding into the SIDS Dock facility established to help AOSIS countries with climate change adaptation measures in the field of renewable energy", the report stated.