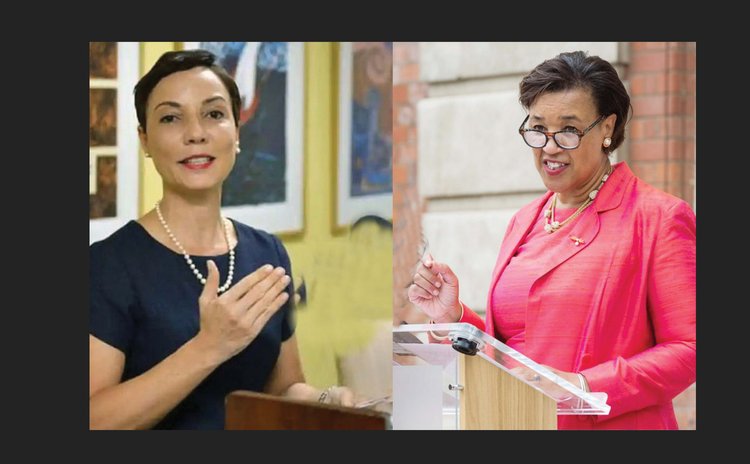 Last Friday -June 24- the battle between Scotland and Jamaica's foreign minister, Kamina Johnson-Smith, who was supported by several big-name countries, ran over by several hours as leaders struggled to reach a decision.

At the opening ceremony of the Commonwealth Heads of Government Meeting (CHOGM), there was no consensus, forcing the decision to be made through a vote at a later closed meeting of heads of state. In the end, it was confirmed that Scotland who narrowly defeated her challenger by a 27 - 24 margin was reappointed for two more years.

Despite the victory for the Dominican candidate, Challenger told the Sun that while Johnson Smith's bid failed, the vote exposed a deeply divided Commonwealth under Scotland's leadership which has been marred by questions over her financial management, personal style and accusations of playing favourites among the group of nations.

"It's nothing for us to shout hip hip hooray over, many of the big-name countries do not want her to be there and I don't see how we can be united after moving on," he said.

Johnson-Smith launched a late and shock bid to be the next Commonwealth Secretary-General, saying the incumbent, Scotland, a Labour peer, had divided the family of 54 nations.

United Kingdom Prime Minister Boris Johnson had been working behind the scenes for nearly two years to remove Scotland, claiming that she had failed to modernise the institution after nearly six years in the job.

In May, Johnson publicly stated that he was supporting her rival for the role adding that Johnson "the UK" supported the candidacy of the Jamaican minister of foreign affairs for her "vast experience and support to unite our unique family of nations and seize opportunities ahead".

During Johnson-Smith's bid for the post, she had received support from Singapore, The Maldives, India, Trinidad and Tobago, Belize, Australia, New Zealand, Canada and India.

Giving a press conference on Friday evening, Johnson rejected the idea that he had been dealt a blow by the decision by Commonwealth leaders to keep Scotland and instead insisted it was a "good day for democracy".

"What is the Commonwealth? It is an amazing group of 54 countries that share values and in particular, the idea of democracy, and I work well with Baroness Scotland – have done for a very long time since I became foreign secretary, I think – and look forward to working well with her in the next couple of years.

"This is a crucial time for the Commonwealth. I think people are looking more and more to this institution, more and more countries want to join it, they see the value of it."

Johnson said it was important that the Commonwealth secretariat delivered value for members.

The Baroness, in a last-ditch effort to save her career, promised that she would only seek two more years in the job instead of a full four-year second term.

Many have said that this was significant as it swayed African countries to her side since it's Africa's turn to select the next Secretary-General.

Commenting on her win, she noted that her reappointment was deeply humbling.

"To continue to serve our family of nations is a true honour and a privilege and I will do so to the best of my ability," she said. "To seek high office is a profound act of service and I want to commend my colleagues who also sought to serve."

Johnson Smith was gracious in defeat.

"Thanking all the countries and people who supported me in this journey!" the Jamaican foreign minister said shortly after the vote. "As I said to many of you, if I didn't pull through, God wasn't ready for me to leave Jamaica yet!"

"Much love always, I continue to serve, and of course, sincere congratulations to Baroness Scotland," she said, adding in the tweet the hashtag "One Love".

Under the convention, the Secretary-General role is rotated around the four geographical blocs that comprise the Commonwealth: the Pacific, Asia, Europe and Africa.

Scotland's term was extended two years because of the pandemic and the inability to host this year's summit which was originally scheduled for 2020.