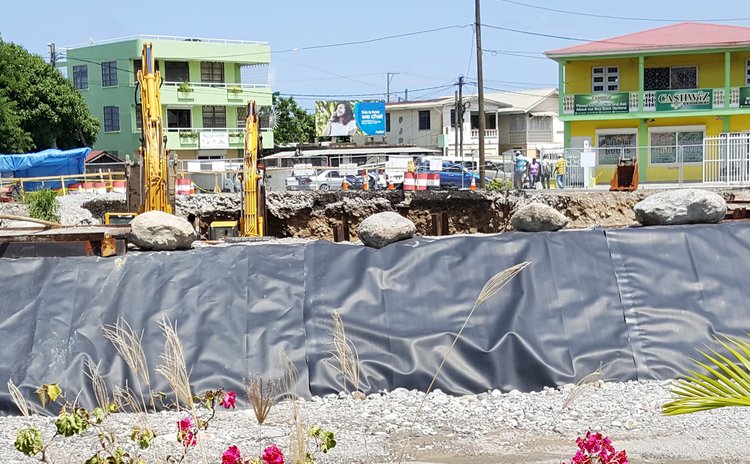 Construction of the Roseau West Bridge in progress

It became somewhat easier to do business here in the last year, but it still was far more difficult than two years ago, according to the latest World Bank 2016 Doing Business report.

According to the report released last week, Dominica moved up six places when it comes to the ease of doing business, from 97th out of 189 countries in last year's report, to 91st this year. However, two years ago the country was ranked 77th on the Doing Business Index.

The current ranking places Dominica ahead of most Caribbean neighbours, with the exception of Puerto Rico (57th), Jamaica (64th), St. Lucia (77th) and Trinidad and Tobago (88th).

In essence, it shows that it's easier to start a business here than in Austria, the Bahamas or Brazil; getting electricity happens more quickly here than in Australia, Canada or Italy and those looking to do business here can get construction permits more easily than in countries such as Barbados, Guyana and Haiti. The report highlights the extent of regulatory obstacles to firms and identifies the source of business environment constraints, Kaushik Basu, the World Bank's senior vice president and chief economist said in the foreword.

"A quick look at the list of economies at the top of the ease of doing business ranking reveals that the best 30 performers are not those with little regulation but those with good rules that allow efficient and transparent functioning of businesses and markets while protecting the public interest," Basu wrote.

"Data in this year's report also show that economies that have efficient regulatory processes as measured by Doing Business have high regulatory quality. In addition, the economies that rank high on Doing Business indicators tend to perform well in other international data sets, such as the Global Competitiveness Index and Transparency International's Corruption Perceptions Index."

Dominica is not listed on the latest report of either of the agencies, but in 2014 it was ranked 39th out of 174 countries on the Corruption Perception Index, making it more corrupt than countries such as Botswana, Bhutan, Chile and Uruguay, and Caribbean countries, Barbados, the Bahamas, Puerto Rico and St. Vincent and the Grenadines.

The middle of the road ranking in the World Bank's Doing Business report does not mean that progress is being made in all areas. Dominica's ranking of 115 when it comes to dealing with construction permits, for example, puts it behind many of the countries which it leads in the overall rating.

It's even more difficult to register properties, get credit or resolve insolvencies, with the country ranking 165th, 133rd and 129th respectively.

In the labour market regulation data, it lists the fact that dismissals due to redundancy are allowed by law and there are no limits to fixed term contracts.

The report makes specific mention of Trinidad and Tobago and St. Kitts and Nevis which modernized their insolvency frameworks in the past year, and of Jamaica and St. Vincent and the Grenadines, which adopted new insolvency laws in 2014/15.

"A common feature of these reforms was the introduction of in-court reorganization mechanisms as an alternative to liquidation, so that insolvent companies can continue to operate. All four economies have also updated their liquidation proceedings, bringing them into closer conformity with international good practices," it says.

The rankings are benchmarked to June 2015.