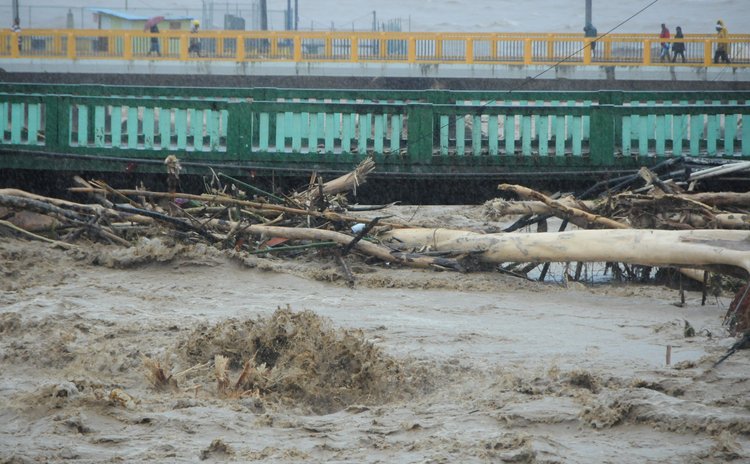 It was the thrill of victory that quickly turned in agony and anxiety for the Dominica men's cricket team.

Having just won the Windward Islands tournament in St. Vincent & the Grenadines, the team led by Liam Sebastien would have been on a high.

However, the celebration was short-lived as the reality of the devastation caused by Tropical Storm Erika set in.

On their way home from Kingstown, the players were left stranded after they arrived in Barbados on the same day TS Erika dumped a foot of rain on Dominica and washed away the dreams of entire families and communities, unsure when or how they would get home, or where they would stay.

A Dominican living in Barbados was making arrangements to house them when the Barbados Cricket Association (BCA) came to their rescue and put them up at a hotel.

"We really appreciate what the BCA has done for us so far," team coach Mervin Thomas told The Sun on Sunday morning from team manager Geoffrey Pierre's hotel room where the team members had gathered for support and word on how they would journey home.

Earlier Pierre was busy on the phone trying to arrange flights on regional airline LIAT for his charges to travel to Guadeloupe from where they would catch a ferry home.

"We are very, very grateful to the BCA. They really expedited the whole process once they found out (about our situation)," Thomas repeated with sincere and humble gratitude.

Despite having the comfort of hotel rooms, the team members felt crippled by a sense of helplessness and were anxious to get home to help. It had also been difficult for them because some of the players had not had any contact with their families.

"It has been very difficult for us as a group; some of them have not been able to hear from their families. So they are very anxious and worried," Thomas, a former Dominica and Windward Islands cricketer, told The Sun.

"We're hearing the stories and seeing the pictures but we would rather be home. We would like to be home . . . to help with the reconstruction," he added.

Earlier LIAT announced that the authorities in Guadeloupe had eased visa requirement for travelers entering the country in order to take a ferry to Dominica. The waiver was valid through to the end of August, and the team members were hoping to get to Guadeloupe on Sunday evening and make their way home from there.

"We're just trying to get to Guadeloupe and take it from there," Thomas told The Sun. "We are getting to Guadeloupe this evening [Sunday]."

Earlier, Pierre had told Barbados TODAY newspaper that the support from Barbadians was heartening.

"Having been here, I have seen the warmth of Caribbean people and how quick the Barbadian people are ready to help and embrace us as one. The BCA was very, very helpful. It really says a lot."

Meantime, the Barbados minister of home affairs Adriel Brathwaite announced on Friday that he would await a report from the damage assessors before determining how the government would assist Dominica. And the opposition Barbados Labour Party (BLP) established a Dominica Children's Relief Fund to assist Dominican children affected by Erika' unforgiving floodwaters.
Calling it an "unexpected storm which Dominica had not been prepared for," BLP leader Mia Mottley said Dominica had always been a supporter of Barbadian artistes and now was the time for Barbadians to give back.

"They weren't even on a tropical storm watch . . . and it has caused catastrophic damage. The situation is grim," the BLP leader said.

"Apart from offering our support as individuals, as a party and in whatever form that we can, I'd like to be able to appeal to Barbadians that they find a way of focusing on extending our helping hand to the children of Dominica in whatever way we can."

She also announced that a relief concert featuring several of Barbados' top artistes would be held sometime in October, with the proceeds going to the fund.