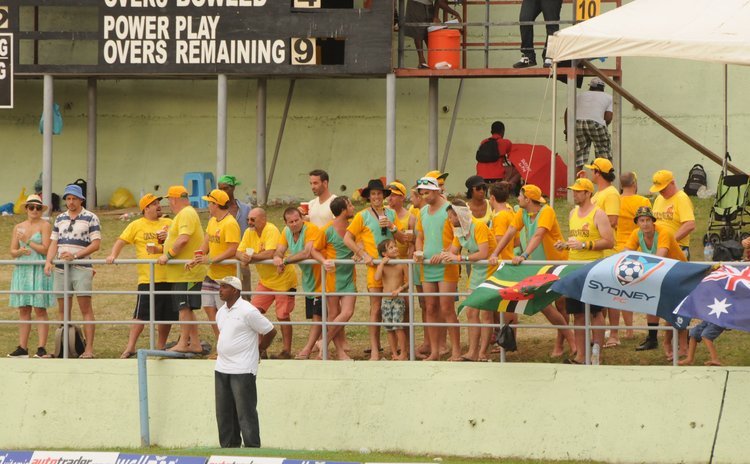 Group of Australian spectators near the Party Stand

Daniel Brettig, an Australian who is assistant editor at ESPNCricinfo, was attacked by two men carrying knives after withdrawing cash from an ATM machine at around 10pm on Saturday night in Roseau, journalist Martin Smith reported.

Brettig was slammed into the ground face first and had his wallet and mobile phones stolen. He was treated at the Princess Margaret Hospital after suffering a bloodied nose, a cut on the head and several other grazes, Cricket.com.au reported.

Players were informed of the incident via a text message from team manager Gavin Dovey on Sunday morning and told to take extra care when venturing outside their hotel in Roseau, the report stated.

The attack on Brettig came on the same night a travelling Australian supporter reported that he was also mugged, while an employee of Ten Sports - the broadcaster covering the series - was attacked on Saturday night.

Brettig, who returned to the team's hotel on Sunday to interview some players, said he was trying to not let the attack ruin his experience of a country he first visited on Australia's tour here three years ago.

Cricket.com.au cameraman Andre Mauger was with Brettig just before the attack. He later accompanied him to hospital and provided a statement to police while frantically trying to get in touch with Brettig's closest colleagues in Roseau, the report stated.

According to the website Dominica is considered one of the safer islands in the Caribbean and the incident was a sobering reminder to the players, coaching staff and the travelling media of the dangers of touring in the West Indies.

The Australian team flies to Jamaica today ahead of the second Test in Kingston.