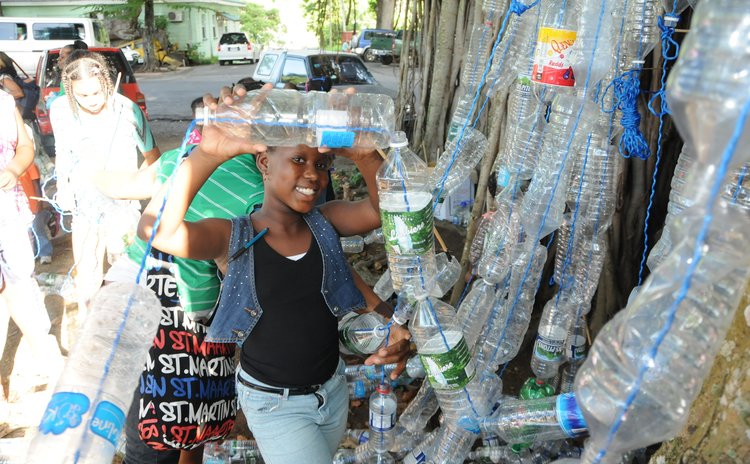 Girl shows plastic bottles at the Dominica Climate Change Day of Action at the Botanic Gardens, Roseau on Saturday November 28, 2015

Last Saturday, children of Mother Earth sang songs, recited poetry, beat drums, painted drawings and built a sculpture of empty bottles on brown, long, hanging roots of a large tree at the Botanic Gardens in Roseau, Dominica. Mother Earth was indeed pleased, her children were paying homage to her.

"This movement is happening all over the world right now," said Jessica Canham, the main organizer of the Climate Change Dominica Day for Action. "Thousands of people are demonstrating, marching and having similar actions like this."

Nevertheless a performance by the Kalinago must have been rather unique to Dominica.

"Mabrika, Mabrika!" chantedMiranda, a Kalinago woman dressed in radiant red as she poured water, lit fire, spread cassava and dripped to the ground a special concoction that the ancient Kalinago warriors drank just before they went to battle hundreds of years ago. She said it was a sacred ceremony to recognise the beauty and goodness of Mother Earth.

Then Bonti Liverpool read a poem that he wrote after Tropical Storm Erika ravaged Dominica on 27th August 2015. He read:

With lightning and thunder

She ravaged and savaged our country Dominica

Then in moving oratory environmentalist Bernard Wiltshire linked slavery and capitalism and the debasement of man to the current phenomenon of climate change.

He said man had destroyed the earth "to meet human greed, not to meet human need" and he charged that our colonial masters began the destruction of the earth by demanding energy and blood to make more profits from sugar and, continuing the plunder of Mother Earth, today capitalists are choking the air with fumes and carbon dioxide and methane.

"These fumes are preventing the earth from maintaining its natural coolness," Wiltshire said. "It is melting the glaciers, it is raising the possibility of the rise in sea levels and it is putting especially the people who live in small island states at risk." Wiltshire conjured the image of Atlantis, the fictional island that disappeared in 24 hours.

"And the words of the Scriptures were fulfilled," he said. "Not a stone shall be left upon a stone and not even the memory of those things shall be left. Today we don't even know if Atlantis did or did not exist.

"Someday we ourselves or generations to come will in fact wonder whether we did exist because we are so fast destroying the world that we did not create but we need for our survival."

Wiltshire said climate change is the most profound moral issue because it concerns the very survival of mankind and he praise Pope Francis for further highlighting the issue in his Papal Encyclical on Climate Change that he called Laudato si (Praise be to you, my Lord).

As the sun dipped beneath the horizon and Mother Earth seemed to get ready for bed, Bishop Gabriel Malzaire put the Pope's Encyclical in perspective.

"From the destruction caused by storms and hurricanes to the drought that spread across the region, from coral beaching to development in ecological sensitive areas, there's no shortage of reminders about the delicate natural balance in which we exist," Bishop Malzaire said. "Our lives and livelihoods in the Caribbean are intrinsically connected to our environment."

What Bishop Malzaire said in prose Monelle Alexis said in poetry. She read a poem written by Christopher Ndubuisi, a climate change technical officer. The poet said in part:

Mankind! When will you repent of your evil ways?

When will you stop biting the hands that have fed you?

When will you love mother earth like she loves you...?

And stop writing her dirge with your actions?

Mother earth looks upon you with her painful eyes

Sobbing and asking you why...

And Silk, the guitarist, played some soothing music to Mother Earth after warning that "each one of I and I, or us, responsible for what is happening… we must live natural and yeah, reduce this thing. You agree with me? Yes or no? How you mean! Resilience to climate change". And then he caressed the strings of the guitar.

By that time at the end of the event, Mother Earth had said her prayers and she had gone to bed. It was dark at the Botanic Gardens.

And Gordon Henderson, the Cadence music icon, sang a piece (recorded, not live) that he composed just for the Climate Change Dominica Day of Action. He sang:

Glaciers melt before our eyes

Greenhouse gases in the atmosphere

Everybody let's make a change.