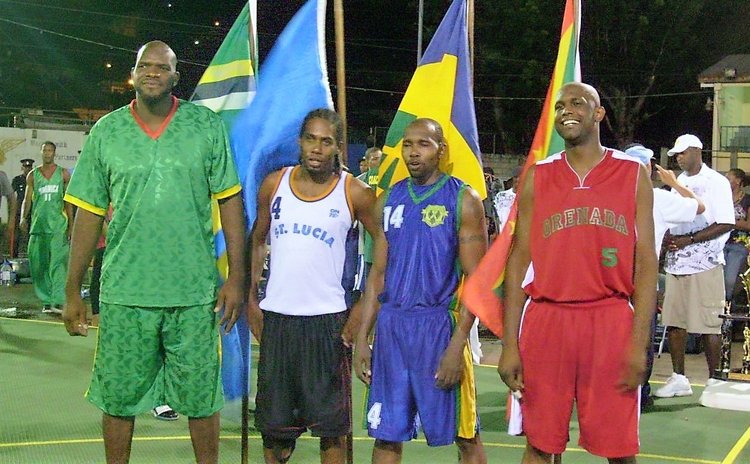 Dominica's national basketball teams, and clubs or teams representing the "Island of Many Rivers", have had their share of successes and disappointments in tournaments involving teams from other Caribbean islands.

Before the advent of CARICOM, CARICOM Youth, Windward Islands, OECS, and OECS "Champion-of-Champions" Tournaments, Dominica's State, then National, Teams had been engaging Island Teams and/or basketball clubs from other Caribbean Territories in friendlies and mini-tournaments, both here and overseas.

Our first "regional" engagement occurred in April 1967 – less than one year after our inaugural basketball league - when Dominica's State Team hosted Guadeloupe's Island Team – the first overseas team to play here. Unfortunately, we lost both matches played against our Kwéyòl-speaking neighbours, by 23 and 7 pts respectively.

According to the Sports Round-Up feature published in the 8th December 1967 edition of Dominica Chronicle, "Our boys were beaten but not humbled" by the Guadeloupeans. The Basketball excerpt went on to state further, "They (Dominica's team) learnt a lot from this experience."

Our team's next such encounter was in October of that same year, against Barbados' League Champions, 7-Up Giants. Dominica drew the 2-match series, in Roseau. According to the Sports Round-Up feature, our team "showed that they were a strong force to reckon with" - at least at the time.

The Nature Island Boys' third regional engagement for 1967 – the fourth for the team's inaugural year – was a return visit to Guadeloupe, where they played against Guadeloupe's Island Team. Although our press did not report on that series per se, the Sports Round-Up noted that Dominica's Island Team "came close to beating" their hosts.

Two years later (1969), our State Team were guests in St. Kitts, where they defeated St. Kitts' Island Team twice, and the hosts' League Champions in another match.

Next, Dominica's State Team travelled south to Martinique in July 1970, where they won two matches and lost one against two top Martiniquan teams. Earlier that year, however, Dominica's then defending League and Knock-Out Champions, Cardinals, had clean-swept a 3-match series against a St. Lucia Representative team, in St. Lucia.

While basketball continued to grow in popularity throughout the Lesser Antilles - Dominica included - the year 1975 was a very important one in a four-island grouping within the Eastern Caribbean when the sport scored a major slam-dunk! That year saw the inauguration of the Windward Islands Basketball Tournament (WIBT), which was hosted by St. Lucia. Grenada grabbed the gold, leaving Dominica to settle for 2nd place.

For the 2nd edition of WIBT, Dominica extended courtesies to our fellow Windward Islanders. However, with strong and enthusiastic home-court support, the 1976 Championship trophy remained right here in Sisserou Land, Dominica.

Thereafter, the Windwards Tournament stayed off the court for a decade and a half, until 1991, when Grenada reclaimed the revived Championships with back-to-back wins in 1991 and 1992.

But come 1993 Dominica hosted, and yanked the WIBT championship back from the Spice Islanders, at the Windsor Park in Roseau.

The 1998 Windward Islands Tournament was staged in St. Lucia where defending champs Dominica finished in the cellar position. However, in 1999, playing in St. Vincent, Dominica improved its final standing to 2nd position, with Grenada as champions. Sometimes, there appeared to have been a ding-dong battle between the Spice Islanders and the Nature Islanders for basketball supremacy in the Windwards.

Stepping back a bit, during the 13-year lull in Windwards basketball (1977 through 1990) we saw the establishment of the Organisation of Eastern Caribbean States (OECS) Sports Desk. Its Co-ordinator, Joseph "Reds" Perreira, had full confidence in Dominica's basketball administrators, and so invited the latter to host the 1st ever OECS Basketball Championships, in 1984. Unfortunately the home team emerged in 2nd place, trailing winners Antigua & Barbuda.

It should be noted that while Windwards basketball was taking its extended Time-Out, the sport was flourishing in the OECS, and Dominica continued to host, as well as participate in OECS basketball competitions overseas; that was at both national and champion-club levels.

It sometimes happened that for some of the players on those national or representative teams such tournaments may have been those players' first opportunity to represent their homeland.