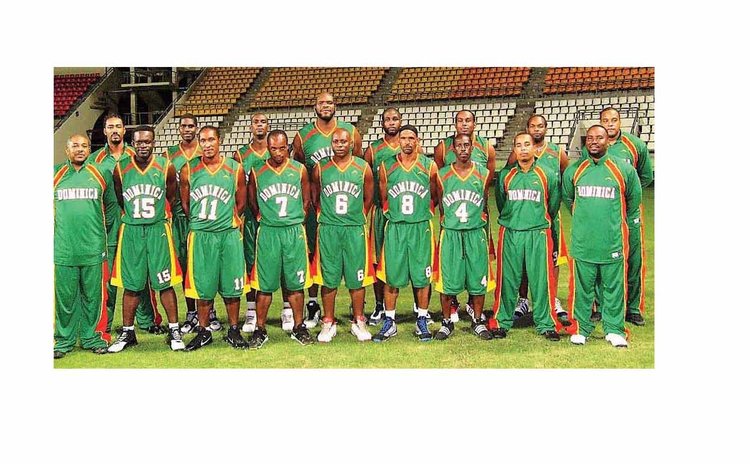 Part I of Dominica in Sub-Regional Basketball glanced at Dominica's representative basketball teams, viz. Dominica's Island then State Team, and clubs, engaging teams from other Eastern Caribbean territories for the first time, in basketball mini-series.

Dominica's first Island Team debuted in 1967, and that year the team engaged other regional teams on three separate occasions. They hosted Barbados' League Champions, and played Guadeloupe's Island Team in a home-and-away series of matches – not in that order.

This was followed by the participation of our National Team in two other larger, but then new, sub-regional competitions which literally "took off" from the 1980s. These were the OECS Basketball Tournament (from 1984), and the OECS Champion-of-Champion Basketball Clubs Tournament (introduced in 1987). Dominica hosted the inaugural editions of both of those OECS basketball competitions.

In October 1989 Dominica hosted the 6th OECS Basketball Championships, but placed 3rd among the five participating teams. Two years later, in May/June 1991, our Cardinals won the 5th OECS "Champion-of-Champions" (the first by a Dominican team) from 7 teams, right here in Dominica.

It can be said that club-teams from the other OECS Territories loved coming to Dominica to play on account of our clean, clear rivers – among other things. Many of the visiting players would journey to "Under Power" (the once popular natural pool in the Roseau River at Bath Estate) for a refreshing morning swim and bath, and not bother about the showers which were available at their temporary accommodation.

It should be noted further that Dominica's performance in the OECS Championships had gone through a short, dry spell when our national team struggled, performing below the expected level. However, it can be said that overall the Nature Island's teams have performed with a fair measure of success in the OECS and Windward Islands Championships.

More recently (2011, 2012), we saw Dominica participating overseas in, then hosting, the Sugar-Creole Basketball Festival which involved the "national" teams of Martinique and St. Kitts & Nevis. That initiative too, appears to have gone into hibernation.

Furthermore, it will be observed that while Dominican women have been participating competitively in basketball since 1977, the island was first represented in a women's basketball tournament more than three decades later. In 2010, a Dominica Representative Women's Team participated in the Gillian Frazer Invitational Tournament held in Antigua, and in 2017 our women participated in a tournament in Martinique.

Basketball tournaments among the OECS took a fatal nose-dive with the retirement of "Reds" Perreira some years ago, and now some of us can merely reminisce on the glory days of OECS and Windward Islands Basketball.

The pomp and ceremony… The colourful parade of national teams, or teams representing their respective Territories... The national flags of the participating teams fluttering in the cool, evening breeze… The nightly crowds at the game venue... The vocal, partisan support for the local/host team(s)… The blasts of the conch shell.. And the almost hypnotising rhythms on the Lapo-Kabwit. Will we ever see a return of those days... or nights, in our basketball? Your guess is as good as mine.

In the meantime, Jump Ball salutes all the players, coaches and managers of the teams that represented Dominica in the first Windward Islands Basketball Tournament 43 years ago; in the inaugural OECS Basketball Championships in 1984; in the initial OECS Champion-of-Champions Tournament 31 years ago; and the "recent" Sugar-Creole Basketball Festival.

Jump Ball also says "Hats Off" to all the other teams, players, and officials who represented Dominica in sub-regional basketball tournaments beyond the inaugural years, as well as in friendlies with teams from other Caribbean islands before the entry of the multi-team tournaments.

Dominica's participation in CARICOM Basketball - at the senior men's and youth levels - will be the subject of a future edition of Jump Ball.