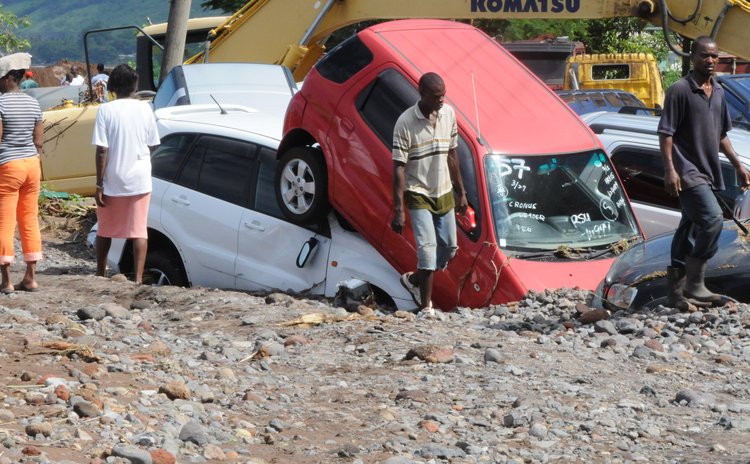 Over the past two days Dominica's blessing became its curse.

Endowed with hundreds of clear, crystal clear rivers, the Nature Island of the Caribbean is now counting the cost of having these usually wonderful rivers.

Pregnant with millions of gallons of water from Tropical Storm Erika, the rivers delivered their load by sweeping, in the dead of night, through towns and villages taking trees, rocks, houses, discarded computer screens-everything- in their path as they raced to the sea.

The rivers took a few people too. Landslides also had their share. We don't know how many people died, how many Erika killed. We'll know later.

Commenting on the disaster, Prime Minister Roosevelt Skerrit said: We can replace the bridges and roads, but we cannot replace the lives.

Weather officials say Erika dumped more than 12 inches of rain over five hours on Dominica. The water then ran down steep mountain sides, raced through narrow gullies, swelled rivers too narrow to contain so much water in so little time.

Rushing down from the Roseau Valley to the city of Roseau, the Roseau River claimed two lives in Bath Estate; it swept through the Roseau Market and flooded the KFC restaurant and took away the Berean Bible Church.

"Everyone welcome", said the intact church sign left on the undamaged side of the church wall. Not now, not for many months in the future will you welcome anyone, Berean.

Today the attention of disaster relief officials, politicians and the press was focused on Petite Savanne, a small mountainous village on the island's southeast coast. Landslides may have claimed many lives there. We are not sure of the numbers and Prime Minister Skerrit is expected to address the nation tonight on the situation in Petite Savanne as well as other areas. He may know how died.

Yesterday, Skerrit said the country has been devastated.

"This is a disaster of epic proportions… the damage is massive", said Skerrit in a statement yesterday from St. Lucia.

He later flew to Dominica with the help of a helicopter from Trinidad because the main Douglas-Charles airport was severely flooded and it would not be operational for at least two days.

Skerrit was expected to tour Petite Savanne this morning by helicopter.

He said the government's priority on today would be to ramp up its search and rescue efforts in that village.

Rescue teams from Venezuela, France, and Trinidad & Tobago are expected in Dominica today and France has already airlifted medical personnel into Petite Savanne.

Because of Erika's rains, critical infrastructure, including the island's airports, remain closed. Flights into and out of the island have also been suspended until further notice.

For travel between villages and communities, Dominicans are using boats because many parts of the island are cut off by broken bridges and landslides.

Tonight more than half of the population is without electricity and, ironically, after being drenched by Erika's rains for five hours, the pipes in their homes are dry.

The cost of repairing the damage is anyone's guess and it could take a few weeks to estimate the cost of fixing homes, roads, bridges and other infrastructure. Maybe tens of millions of dollars? Maybe more?

By the way tomorrow is the 36th anniversary of Hurricane David- another disaster of "epic proportions".