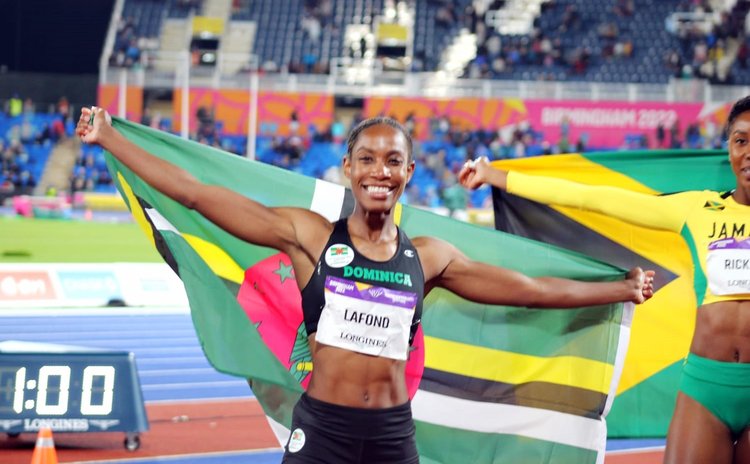 Draped in the Dominican Flag at the Commonwealth Games- Thia LaFond

Lafond started strong getting a jump of 14.39 meters in her first attempt to put her in second place at the end of round one. The tone for the rest of the competition was set, as Lafond and the rest of the pack knew that they would need to better the Commonwealth Games record after Jamaica's Shanieka Ricketts smashed the record with her first jump of 14.94 meters.

In her second leap Lafond missed her run-up and took off before the board registering a leap of 13.70 meters. The medalist in her pursuit of 14.94 on her third attempt got 14.19 meters which comfortably secured her spot in the medal round.

In her first jump in the medal round she leaped 14.25 meters. In her second jump, still chasing the 14.94 set by Ricketts, Lafond recorded a leap of 14.04 meters.

It came down to the final jump, Lafond needing 14.95 to secure the gold medal, and also needing to pay attention to England's Naomi Metzger who was just two centimetres behind her in third place.

She however fouled her final attempt. Despite the foul, she was able to hold on to the 2nd position to win the Silver Medal, her second Commonwealth Games Medal. The event was won by defending Commonwealth Games Champion Shanieka Ricketts of Jamaica who set a new games record of 14.94 meters.

Hard labour for an attempted thief of solar light

Kerwin Pether Davis of Concord has been sentenced to two years of hard labour for attempting to steal a solar panel from a light pole at Pointe Ronde.

In a report to the media, Acting Inspector Fixton Henderson revealed that on Wednesday 27, July 2022 at about 7:25 pm the Portsmouth police intercepted Davis while he was attempting to commit the crime.

He was arrested and charged with the offence and later brought to the Portsmouth magistrate court on Tuesday, August 2, 2022, where he pleaded guilty to the charge.

Davis was then sentenced to two years of hard labour at the Dominica State Prison.

The Commonwealth of Dominica Police Force (CDPF) warns persons who engage in such illegal acts to desist, "for such acts are being taken very seriously."

As of August 1, 2022, Dominicans and other nationals wishing to travel to neighbouring French territories will no longer be required a COVID-19 test, proof of a compelling reason for travel, the presentation of a sworn declaration that they are not infected with COVID-19 and a pledge to take an antigen test or biological exam upon arrival into the French countries.

According to Managing Director of L'Express des Iles Roland Bellemare, this ease of restriction will prove beneficial to intraregional travel between countries. He highlighted that since the emergence of the pandemic, travel to these countries have decreased from Dominica and St Lucia to 30 percent, however, with these new relaxed measured, he is optimistic that these figures will increase

Bellemare went on to stress that COVID entry protocols are still in place for people wishing to travel to Dominica from these islands.

Twenty to be awarded at the National Youth awards ceremony

Come September 26, 2022, 20 Dominican youth will be awarded for their outstanding contribution in their respective fields.

As such he encouraged the public to visit their website and nominate a youth between the ages of 16 and 35 who have contributed to and created positive change in the lives of others within their community and/or nation.

Republic Financial Holdings Limited announced a profit attributable to its equity holders of $1.15 billion for the nine months ended June 30th, 2022. This is an increase of $109.7 million or 10.6% over the $1.04 billion reported in the corresponding period of the last financial year.

In announcing the results, Chairman of RFHL, Vincent Pereira said the performance for this period of 2022 reflects a modest improvement over their core pre-Covid 2019 third quarter performance by $6.3 million or 0.6%.

The Group comprises six countries-St. Lucia, St. Kitts and Nevis, St. Vincent and the Grenadines, Dominica, Anguilla, and St. Maarten benefited from the relaxation of Covid-related protocols in their tourism-dependent areas where economic activity continues to improve steadily.

Rising interest rates on US dollar-denominated securities in some of RFHL's operations also positively impacted their financials.