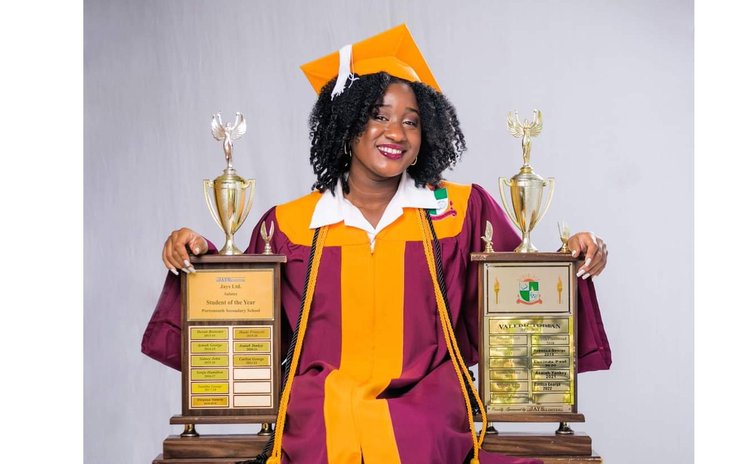 Portsmouth Secondary School student, Carlisa George, has snagged the highest number of grade ones at this year's Caribbean Secondary Certificate Examinations in Dominica.

George was also named the valedictorian and Student of the Year during the Portsmouth Secondary School graduation ceremony in July this year, earning herself a total of 14-grade ones.

Other top performers include Austin King and Deleon Fontaine of the Arthur Waldron Seventh Day Adventist school, who obtained 13 and 11-grade ones respectively, as well as Charvis Alcid and Serena Matthew of the Portsmouth Secondary School and Marcellus Lee of the St Mary's Academy who all obtained 10-grade ones, at this year's examination.

It's been almost a week since the police launched an investigation into the firebombing of a police vehicle and part of the police station in St Joseph, but according to sources, no one has yet to be charged for the crime.

According to reports, the incident occurred in the early hours of September 12, 2022, and included extensive damage to a van parked outside of the station along with the front door of the station.

During the past week, neither police officials nor the authorities have said anything publicly on this matter.

Another year without CITP

Fans of the once annual Creole In The Park (CITP) may just have to wait another year for the return of the pre-festival family event, as it has once again been called off for the third consecutive year.

Minister for Trade, Commerce, and Entrepreneurship, Ian Douglas, made the announcement, highlighting that the four-day event will be replaced with a Buy Dominica campaign dubbed, ''Ti Village Creole, Tout Bagai Domnik."

He said that the hope is to attract visitors to the Botanical Gardens where all of Dominica's local produce will be on display.

Douglas continued: "Not only will we have our usual cultural activities and our food and our crabs, callaloo and our local foods…our local fashion display also, will form part of this activity."

The Trade Minister called on Dominicans to gear up for the event and to ensure that their booths are enlarged for that activity.

The annual FLOW CITP was last staged in October 2019. The event, which precedes the World Creole Music Festival, showcases the best of Dominica in creole cuisine, local culture, arts and craft, and features live music from local and regional artists, as well as traditional dancing, and steel pan.

Upon request from stakeholders, the Government of Dominica has approved the formal importation, storage and sale of Ultra Low Sulphur Diesel (ULSD) by petroleum product importers and retailers.

According to Dominica's Director of Trade, Matthan Walter, in the past, only High Sulphur Diesel (HSD) was formally recognized, sold and distributed throughout Dominica.

Walter stated that the USLD is a cleaner burning fuel that contains 97% less sulphur than low sulphur diesel.

"It is more refined and processed and therefore fetches a higher price on the international market," he said.

Dominica's Speaker of the House of Assembly, Joseph Isaac, joined hundreds of world leaders at Westminster Abbey to witness the final send-off of her Majesty Queen Elizabeth II.

Last week, the government announced that Isaac would represent Dominica at the State funeral which took place on Monday, September 19, 2022, for the United Kingdom's (UK) longest-serving monarch, who died on September 8, at Balmoral Castle after a 70-year reign.

In a show of "appreciation and respect" for the life and contribution of Her Majesty Queen Elizabeth II, the Government of Dominica, also declared last Monday, September 12 and Tuesday, September 13, 2022, as two national days of mourning.