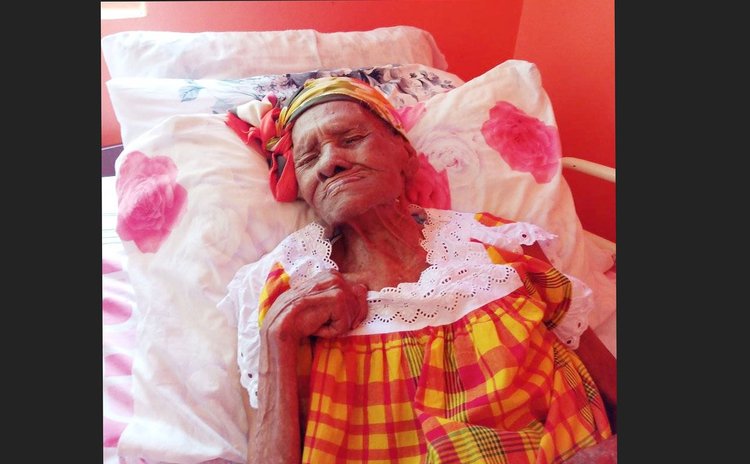 Two more days, and centenarian Marcelline Francois Letang, would have celebrated the milestone of 102 years on earth. But sadly, the former housewife passed away at the COVID-19 facility in Portsmouth on March 12, 2022.

Better known as "Nanin", she was born in Thibaud but resided in Vieille Case in her later years. Her death now takes the number of centenarians who have died for the year thus far to three.

In March of 2021, Dominica was said to have the highest number of centenarians per capita-27. Within the upcoming months, the country was also expected to celebrate the 100th milestone of several other gems, which would have taken the count past the 30 mark. But with the rise of the COVID-19 cases came the decrease in the number of these gems, to where the country only has 15, which the Dominica Council of Ageing (DCOA) say is the highest number of deaths among centenarians which has been recorded in any given year.

According to the DCOA database, the number of living centenarians in Dominica is only projected to decrease, as no individual on the island is expected to hit the 100th milestone this year.

The Commonwealth of Dominica Police Force has put a red light on ongoing talks of a possible bus fare increase as a result of the recent hike in fuel prices. Since the increase in the cost of fuel, notifications concerning the new bus fares for particular communities have been disseminated via social media. However, in a statement read on behalf of the Chief of Police who is the Chairman of the Dominica Transport Board, Acting Superintendent of Police, Leana Edwards, stated that no approval has been made or granted for an increase in fares and cautioned against this offence.

"Let me inform the bus drivers that there is a process by which bus fares are increased. The Vehicle and Road Traffic Act number 46:50 of the laws of the Commonwealth of Dominica 2017 indicates that the Transport Board has to advise on transport rates, fares, tolls, dues or other charges. Consequently, there must be engagement with the Dominica Transport Board where a formal request is made," she said.

The Acting Superintendent encouraged bus drivers to make a formal request to the Dominica Transport Board for any rate change desired.

Within the next few months, residents on the island may see a change in their electricity bill, as come April 2022, the Independent Regulatory Commission (IRC) will conduct a tariff review exercise that may mean new electricity rates for the Dominica Electricity Services Ltd. (DOMLEC).

Speaking at a news conference on March 17th, the Executive Director of the IRC, Justin Kase, explained that costs incurred by DOMLEC will guide the determination of electricity rates. As highlighted, the review will determine DOMLEC's rate of return on its investment and ensure DOMLEC is meeting its revenue requirement (the amount of money that customers are required to pay for the cost of supplying electricity over the period.)

The IRC will also seek the input of various stakeholders, including consumers, before the decision on setting new rates. As the regulator of the electricity sector in Dominica, the Electricity Supply Act No. 10 of 2006 empowers the IRC to review and approve electricity rates.

The current Minister for Public Works and the Digital Economy in the Roosevelt Skerrit-led administration, Senator Cassani Laville has been named as the Dominica Labour Party (DLP) new General Secretary.

According to a media release, Laville was unanimously elected at a National Council meeting held on Thursday, March 17 2022, at the Goodwill Parish Hall. The post became vacant due to the passing of Edward Registe in September 2021. The DLP has expressed confidence that Laville will embrace his new role with "characteristic passion, enthusiasm and commitment."

The former Programme Engineer for the National Authorising Officer of the European Development Fund is an engineer by profession and holds a Master of Science degree in civil engineering.

The Government of Dominica, on Wednesday, March 16, signed a new United Nations Multi-Country Sustainable Development Framework (MSDCF) for the Caribbean for the period 2022 -2026.

The Framework focuses on four areas: economic resilience and shared prosperity; equality and wellbeing; resilience to climate change shocks and sustainable natural resource management; and peace, safety, justice, and the rule of law.

The new cooperation framework was signed by Roosevelt Skerrit, Prime Minister of Dominica and H.E Didier Trebucq, UN Resident Coordinator for Barbados and the Eastern Caribbean.