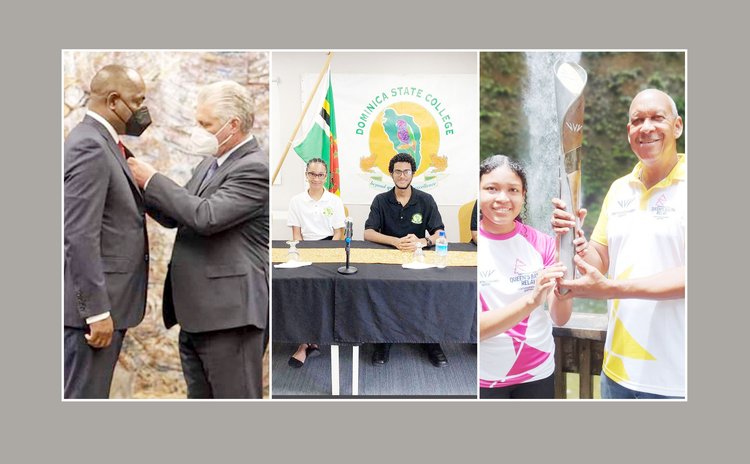 With less than 100 days to go until the start of the Commonwealth Games, the Queen's Baton Relay has continued its global journey, making Dominica its 55th stop.

On day 203 of its 294-day long journey, the relay arrived in Dominica on April 28, for a two-day visit as part of its epic journey across 72 Commonwealth nations and territories, leading up to the games.

On its arrival on Thursday at the Ferry Terminal via the Coast Guard from Montserrat which was its previous destination, President of the Dominica Olympic Committee (DOC), Billy Doctrove, along with other officials from the committee, accepted the Baton.

During the DOC's march with the Baton from the Ferry Terminal to the Peeble's Park, accompanied by the Dominica Cadet Corps, the Queen's Baton was passed en route, to the selected "Changemaker Batonbearer" 20-year-old female athlete Adicia Burton.

Burton is the Kalinago representative of the National Youth Council of Dominica, a youth parliamentarian, and national volleyball and cricket player, having represented Dominica at the Youth Olympic Games, among other competitions.

On the day of arrival, DCO held a cocktail party that evening for affiliates of the Commonwealth Games along with representatives from the Ministry of Sports.

The following day, an organized relay through the city of Roseau by athletes from over 10 different sports followed by a presentation of the Baton to the President of Dominica, H.E. Charles Savarin was held.

During its visit, the Baton also paid a visit to the Massacre/Canefield Primary School, as well as the Mahaut Primary School, and viewed some sporting events. On April 30, the Queen's Baton Relay visited some of Dominica's natural sites during a hike and afterward visited the Kalinago Territory and the second town, Portsmouth.

On its departure day, May 1, DOC's executive member, Korlita Hamilton, accompanied the Baton to its next destination, the British Virgin Islands (BVI).

On April 26, Prime Minister Roosevelt Skerrit joined a list of world leaders when he was awarded the José Martí Award by the Government of the Republic of Cuba.

The Order of José Martí is Cuba's highest state recognition given to nationals, and Heads of States and Governments, who have distinguished records in the defense of human rights and have made special contributions to education, culture, governance, and wellbeing of all peoples.

Skerrit who is now the first leader in the OECS to receive such esteemed acknowledgment expressed his "deepest gratitude" to the Government of Cuba for bestowing him with this honour.

The award is named for José Martí, a poet and writer lauded as a nationalist, philosopher, activist, and humanitarian. He is known as the 'Apostle of Cuban Independence.'

Students in Dominica and across the region will have an additional three weeks to prepare for this year's Caribbean Secondary Education Certificate (CSEC) and the Caribbean Advanced Proficiency Examination (CAPE). This comes following the announcement by the Caribbean Examinations Council (CXC) of a shift in the dates of the exam from April to June to now from May 23 to July 2022. According to officials, this change was due to the effects of the pandemic on the region's education system. A further two-week extension has also been granted for the submission of school-based assessments (SBAs). With the date change, the exam results are now expected to be released in late August or early September.

Amassing a total of 649 points, Hananel Valerie, and Mr. Noah James debated at the finals on the topic "Countries Have a Right to Impose Vaccine Mandates to Protect the Health of Their Populations."

Previously, the DSC won the semi-finals as they debated against Grenada (T.A Marryshow Community College) on the topic, "The Shift to Virtual Learning During the Pandemic Exposed Regional Governments' Failure to Successfully Integrate ICT into Our Education Systems."

The National Bank of Dominica (NBD) has warned customers to be aware of possible fraudulent activities and unknown charges on its client's card account. The bank said in a statement that it appears this may be related to a compromise of foreign merchant (s).

"This issue did not originate with NBD but would have affected our client's card use on these merchants," the bank said. "The National Bank of Dominica Ltd. takes the safeguarding of your account seriously and will continue to monitor card activity for suspicious transactions and take the necessary action."

NBD encouraged all its cardholders to be vigilant and monitor their card accounts closely for any unfamiliar transactions.

"If you believe you are a victim of fraud related to your NBD credit or debit card, please contact us immediately," the bank stated.